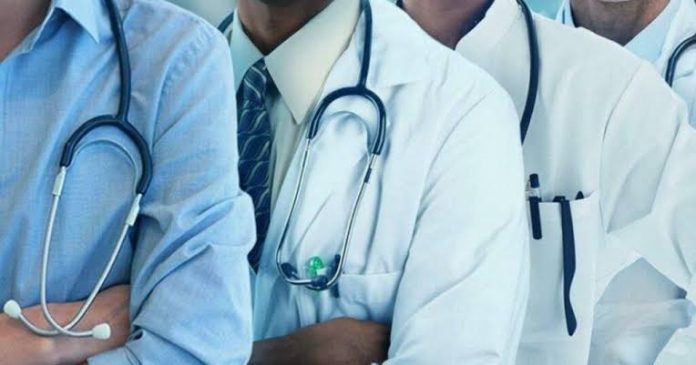 The doctors who thronged out in their numbers were also protesting 13 months arrears owed to doctors and other staff of the Health Management Board.

Doctors from different parts of the state converged at the Federal Medical Centre, Umuahia before proceeding to the Government House Gate, chanting solidarity songs as they marched on the road.

They also carried placards with different inscriptions such as:”Doctors’ lives matter”;”Our salary is our entitlement”; “2 years without salary ‘no be jokes’”; ” Man’s inhumanity to man”, among others.

Ventilating the grievances of the protesting doctors at the entrance gate of the Government House, Chairman of the Nigeria Medical Association, NMA, Abia State chapter, Isaiah Abali, who led the procession, said doctors in the employ of the State Government were passing through hell following many months of unpaid wages.

Abali decried the condition of the affected doctors, many of whom he said, “no longer meet their daily needs” while he expressed sadness over government’s failure to clear the backlog of salary arrears of doctors, as he prayed God to judge anybody playing politics with the welfare of doctors.

He said that the protest had no political undertones whatsoever, and asked the Government to stop giving excuses but clear the outstanding arrears.

Speaking earlier, NMA Secretary, Daniel Ekeleme, narrated the bitter experiences of some doctors in the hands of their landlords following their inability to renew their house rents.

“Landlords no longer accept Abia doctors because we can’t pay house rent any more. Some of us can no longer pay our children’s school fees. Feeding has become a big challenge now, all because Abia State Government has refused to pay us.

“Abia doctors are the least paid in the country. Out of the 36 states, Abia is the only state where doctors are owed for years.

“We have begged, we have made appeals but they fell on deaf ears; now we are here so the world can hear us. Doctors are dying in Abia. Next time we will come with the bodies of some of our members who have died as a result of hardship. Is it a curse to be a doctor in Abia?”

Adding her voice, a Consultant Hematologist at ABSUTH, Chika Uche, said it was wickedness for the government which “receives allocation every month” to pay political office holders with jumbo allowances but owe workers who earn peanuts.

She noted that some of the staff members of the affected institutions include cleaners and other non-medical staff with meagre pay, as she described the adamancy of Government to the plight of doctors as cruelty and the height of insensitivity.

Meanwhile, no government official came to receive or address the protesting doctors, who later dispersed after narrating their ordeals to newsmen and some passersby.

A detachment of armed police personnel was, however, on ground probably to maintain peace and order.

NMA had towards the end of last year threatened to cripple the entire health sector of the state until the Government cleared the salary arrears.

The medical body also declared an indefinite strike in both public and private hospitals in the state but despite the threats, the government is yet to meet the demands of the doctors.