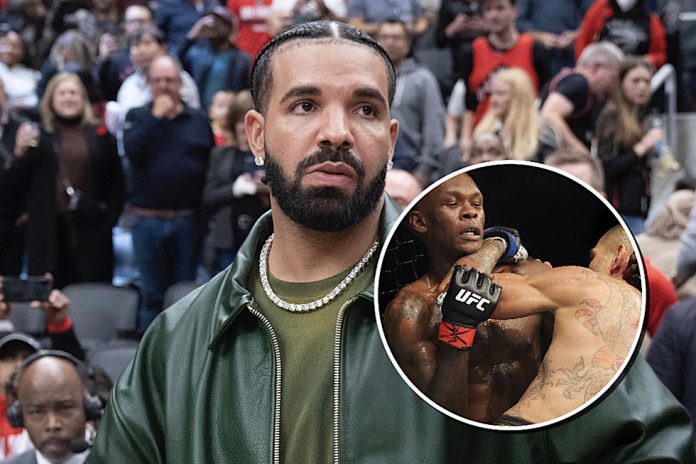 Rapper Drake has taken a keen interest in betting on UFC bouts, but the Canadian has lost over £2million backing his favourite fighters this year alone.

With a net worth of around £218m the highest selling digital artist, who has collaborated with the likes of Rihanna, Nicki Minaj and Kendrick Lamar, can certainly afford to squander a few million on his hobby. However, UFC fighters might want to avoid being backed by the star as the ‘Drake curse’ is in full force.

The Canadian gambled £1.7 million on the Nigerian born star retaining his middleweight title but lost it all when a savage left hook sent Adesanya crashing to the canvas. Drake started losing serious money on the UFC when he bet £231,000 on the welterweight contest backing Jorge Masvidal to beat rival Colby Covington.

Fans started to become intrigued by the bets of the star, also dubbed ‘Champagne Papi’, who next put £336,000 on Justin Gaethje to cause an upset against Charles Oliveira in May. Once again the rapper was left out of pocket when Oliveira recorded a quick submission.

It hasn’t all been bad news for Drake who made over £3 million on Scouse UFC stars Paddy Pimblett and Molly McCann. He also previously had success betting on Adesanya putting a £840,000 wage on him beating Jarod Cannonier in July.

However, Drake’s betting curse has since returned losing money after putting two separate bets on Jose Aldo and Kamaru Usman After Adesanya’s defeat fellow UFC stars might be asking the rapper not to put any more wagers on their performances.

It’s not just UFC that Drake has lost money on after the 36-year-old also blew £537,000 by betting on Barcelona in this season’s El Clasico, only for Real Madrid to triumph 3-1.