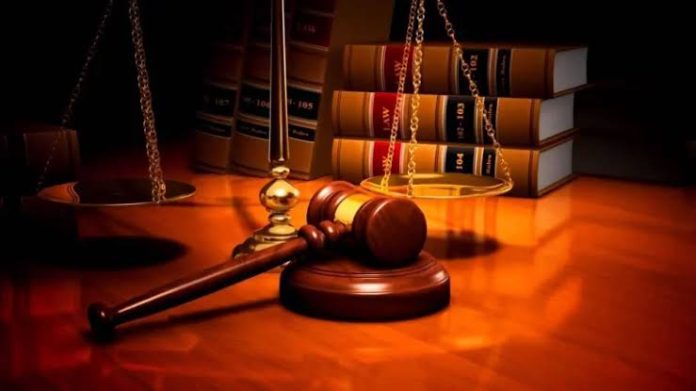 There was a mild drama recently as a man named Wale Adenigbagbe, 26, accused of stealing a power generating set, feigned lunacy while being taken to court by men of the Osun State Police Command.

The Investigation Police Officer, Sergeant Akinsoji Oladimeji, disclosed that the suspect, upon getting to the entrance of the Magistrate’s Court in Osogbo, tore his cloth and stripped himself naked.

Oladimeji said, “It was a tough time for us on the way to the court today. At first, when we were inside the vehicle, the suspect was telling us that he would frustrate our efforts at arraigning him. I never knew he was up to something dramatic.

“When we got to the court gate, he started tearing his clothes. He started with his shirt and then tore his knickers. We had to bundle him into the court room and handcuffed him.”

Another mild drama ensued in court as the suspect denied the knowledge of the three-count-charge of stealing read out to him by the court clerk.

After reading the charges to him in English language, the suspect who claimed to be a student of Kosile Memorial Grammar School, Itagunmodi, Atakunmosa West Local Government Area of the state, disclosed that he could not understand the information.

The Magistrate then asked the clerk to read the charges to him again in Yoruba language. But, after repeated efforts, Adenigbagbe insisted that he could not understand the charges pressed against him.

The charges brought against him read that “Wale Adenigbagbe, on the 8th of January, 2023 at about 9:44am at Ago-Ayo area, Osogbo, in the Osogbo Magisterial District, did attempt to commit felony to wit stealing and thereby committed an offence contrary to and punishable under Section 509 of the Criminal Code, Cap 34, Volume II Laws of Osun State, 2002.

“You, Wale Adenigbagbe, on the same date, time and at the aforementioned Magisterial District, did steal one generator valued at N70,000, property of one Olayomi Ilufoye and thereby committed an offence contrary to and punishable under Section 390(9) of the Criminal Code, Cap 34, Volume II Laws of Osun State of Nigeria, 2002.

“You, Wale Adenigbagbe, did conduct yourself in a manner likely to cause breach of peace and thereby committed an offence contrary to and punishable under Section 249 (d) of the Criminal Code, Cap 34, Volume II Laws of Osun, 2002.”

Displeased with the defendant’s attitude, Ayilara ordered that he should be remanded in Ilesa Correctional Centre and adjourned the matter till January 23 for mention.

In an interview with The Point, Adenigbagbe claimed that he did not know why he tore his clothes.

He disclosed that he finished his secondary school education in 2015 and that he was in Osogbo to learn barbing.

Adenigbagbe admitted that he was arrested at the scene of the offence but said, “I don’t know how I got there. I was at Oja-Oba area of the town but later found myself at Ago-Ayo. I didn’t steal anything there.”