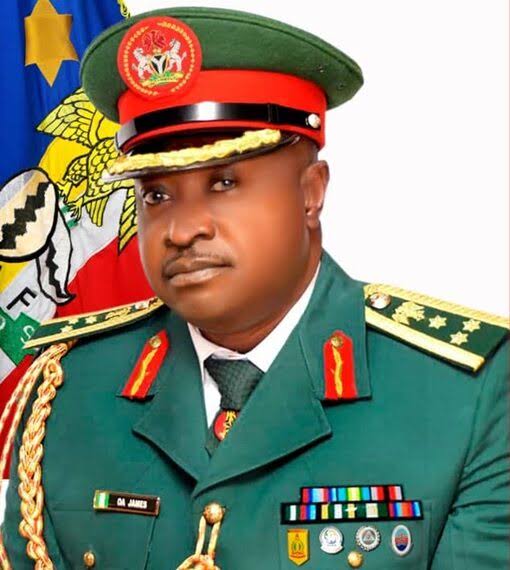 The top army officer reportedly died Tuesday night from injuries he suffered after a corporal, Abayomi Ebun, believed to be drunk, hit him with a car, those familiar with the matter told PREMIUM TIMES.

The incident reportedly happened at about 10:30p.m Tuesday as Brigadier General James was walking to his residence inside the NAFRC barracks in Lagos.

“The general was trekking to his apartment inside the Barracks when he was hit and knocked down by the drunk soldier,” one of our sources said.

“The soldier also resides inside the barracks and was seen driving recklessly before hitting the senior officer,” it was said.

PREMIUM TIMES learnt the General was rushed to the NAFRC Medical Centre after the incident where he was confirmed dead.

The army corporal has since been arrested and is being detained by NAFRC provost marshals investigating the matter.

The Nigerian Army was yet to comment on the incident. The spokesperson to the Force, Onyema Nwachukwu, a brigadier general, did not answer and is yet to return calls seeking comments.

Until his death, Brigadier General James was a senior member of the Nigerian Army Finance Corps. He had bachelor’s and master’s degrees in Accounting as well as a Master of Business Administration in Finance.

He was decorated with the Meritorious Service Star (MSS) and Pass Staff College (PSC).

The Nigerian Armed Forces Resettlement Centre where Brigadier General James served until his death is a Tri-service institution saddled with the training of military personnel in one vocation or the other before retiring into civil life.

The objective of the Centre, the defence headquarters says, is to assist retiring military personnel in settling into civil life with ease. At inception, the centre was known as the Nigerian Army Resettlement Centre. A change of name became necessary after other sister military services became involved in its operations and services.