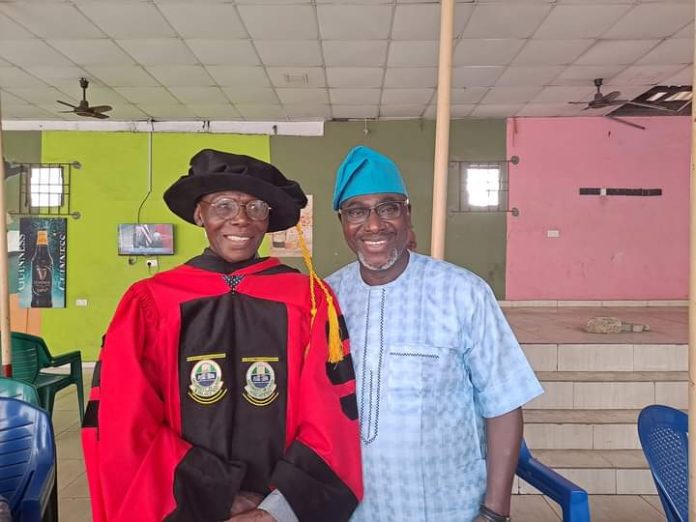 According to him, he feels on top of the world.

A former Director of the Nigerian Institute of Journalism, Duyile, was on Wednesday among the 2,251 graduating postgraduate students at the 60th anniversary and 53rd convocation of the University of Lagos.

The ceremony marked the end of the week-long activities lined up for the conferment of degrees made up of 69 Postgraduate Diplomas, 2,119 Masters and 65 Doctorate Degrees, cut across various disciplines.

Speaking to newsmen on the sidelines of the event, Duyile expressed satisfaction for achieving the feat even at his age.

He noted that he felt fulfilled to witness the day come to pass, adding that where there is dedication and determination, every dream could be attained and obstacles surmounted.

“I want to say I feel very happy and fulfilled. Right now, I feel on top of the world because I have been longing for this opportunity for about 35 to 40 years now.

“But I did not have the opportunity because all the admissions for my Ph.D. were thwarted by other engagements. So, I could not do that since 1991.

“I have been resilient, making efforts to go to the university to do my Ph.D. and today, it is a reality and even at my age, it is something to be proud of,” he stated.

On how he felt interacting with students young enough to be his children, the octogenarian stated that it was full of fun.

He noted that it gave him the privilege to mix with them freely and see things from their own perspective.

According to him, it also made him feel much younger than his age.

“By mixing and interacting with them, I did not only have fun, it also made me feel much younger.

“I felt like a very young man because I was always sharing their views, discussing on the same platform and there was nothing like aging in our discussions.

“All that we discussed was academic, political or international issues. So, in fact, I really loved and enjoyed being in the midst of younger people because it made me feel young myself,” he stated.

Advising young and upcoming journalists, Duyile urged them not to imbibe the habit of alcoholism, if they intend reaching the peak of their career.

He noted that such habit would easily make them lose focus and unable to have a good grasp of facts and realities on ground. Such persons cannot make good journalists.

“All those aspiring to be professionals in the industry must firstly strive to be committed. The issue of choosing the path of journalism by any young person must first toe the line of total commitment.

“When I started journalism in the 1960s, my editor told me that in this profession, you might not be rich, but you will be famous, people will love you if only you are doing the right thing and are capable of writing well and be upright,” he said.

He said that the upcoming journalists too must ensure they are knowledgeable in almost everything so as to be able to highlight and share societal challenges, as well as strive to proffer solutions to some of these challenges.

“Otherwise, if you are looking for how to become a millionaire, then, this is not the place for you. So, again, I will advise the younger ones to be serious, committed to the profession because the sky will be the limit to every good writer here in Africa and globally.

“Right now even at 83, I am still a correspondent to some overseas newspapers and I eke my living from that. I also teach in a university currently, Elizade University, Ilara Mokin in Ondo specifically, as a lecturer in Mass Communication.

“I have also taught in some universities such as Wesley University in Ondo and Adekunle Ajasin University Akungba” he said.

Duyile was the journalist that covered the opening ceremony of UNILAG on October 3, 1962, while working for the Daily Times of Nigeria.

Meanwhile, another octogenarian, a female, 82-year-old Bridget Okonji, alongside Duyile obtained her M.Ed in Guidance and Counseling.

The Vice Chancellor of the university, Folasade Ogunsola, had in her welcome address stated that the awards were in accordance with the provisions of the institution’s Act.

She said that the Act empowered the university to identify and honour deserving members of the society with proven integrity.

According to her, these persons have distinguished themselves in their chosen careers and demonstrated significant contributions in raising the standard of the institution.

She said they had done these through teaching, research, administration and service in the community. (NAN)