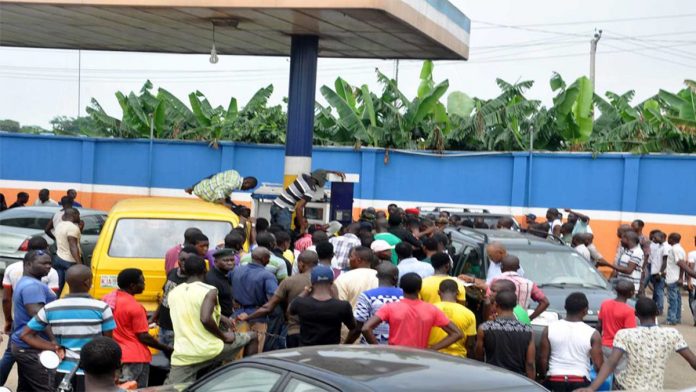 The Federal Government has denied any increase in the price of Premium Motor Spirit popularly called petrol, despite the hike in the cost of the commodity across the country.

The Minister of State for Petroleum Resources, Timipre Sylva, in a statement issued by his media aide, Horatius Egua, in Abuja on Friday, said President Muhammadu Buhari had not approved any price increase for PMS.

He was quoted as saying, “President Muhammadu Buhari has not approved any increase in the price of PMS or any other petroleum product for that matter.

“There is no reason for President Muhammadu Buhari to renege on his earlier promise not to approve any increase in the price of PMS at this time.

It was earlier announced on Thursday that the Federal Government had officially increased the price of petrol by 8.8 per cent to N185 per litre, from N170 per litre.

It is more than three months now that the scarcity of petrol has emerged in many parts of the country.

This was attributable to an alleged increase in ex-depot price, debt and logistics challenges.

The situation appears to be getting worse with many Nigerians buying the product at a premium at the black markets or waiting endlessly in prolonged queues for the product at the regulated price.

With the commodity selling as high as N270 at the pump in many retail stations owned by independent marketers, consumers have questioned the rationale and loud silence of the sole importer, the Nigeria National Petroleum Company Limited and the regulator, Nigerian Midstream and Downstream Petroleum Regulatory Authority.

While there have been promises as regards the situation, Nigerians who need to power their homes and businesses using generators as well as many motorists have yet to see an improvement in the supply of the product across the country.

Similarly, the traffic created as a result of the fuel queues continues to impact productivity as many people now spend more hours on the road.

With many Nigerians now paying as high as between N250 and N500 for a litre of petrol, we think it is time for the Federal Government to hand off the regulation of the price of the product to allow market forces to prevail.

At the moment, most filling stations across the country have continued to sell the product, far above the regulated prices, despite the huge resources spent in subsidizing the prices by the Federal Government.

Only the retail stations belonging to the Nigerian National Petroleum Company Limited and the few marketers that are members of the Major Oil Marketers Association of Nigeria that were selling petrol between N165 and N170 per litre.

“The humongous amount spent in the guise of a subsidy regime is literally being used to subsidize inefficiency, corruption and consumption. These funds should be judiciously used for more productive activities that will directly impact the lives of citizens”

Other retail outlets owned by marketers under the aegis of the Independent Petroleum Products Marketers Association of Nigeria, which controls the largest number of filling stations nationwide, were selling far above the regulated prices.

The current realities have made it obvious that spending huge trillions of naira on petrol subsidy, even when the product is still not available in many filling stations, is no longer sustainable.

The Federal Government should quickly abolish the subsidy regime and free the projected N6 trillion for petrol subsidy in 2023 for other critical sectors.

Speaking during an interview at the just-concluded World Economic Forum which took place in Davos, Switzerland between January 16 and 20, 2023, the Minister of Finance, Budget and National Planning, Mrs. Zainab Ahmed, stated that the Federal Government was considering a gradual phasing out of petrol subsidy payments from April, instead of removing it in one fell swoop in June.

At the prevailing exchange rate, marketers are projecting that the correct market price of petrol would be between N450 and N500 per litre.

They are urging the monetary authorities to make foreign exchange available to all marketers to enable every marketer to go into importation of petrol.

They are equally advising the government to ensure that the four petrol refineries in the country are brought back to perfect shape.

Against the provisions of the Petroleum Industry Act, which approved for full deregulation of the downstream petroleum sector, the Federal Government had in January last year postponed the removal of petrol subsidy by 18 months, to June this year.

We have to come to the terms with the marketers that it is increasingly difficult if not impossible to supply petrol and sell at the government’s price and by forcing NNPC to do it; it has become a big challenge for them.

The Federal Government should jettison fuel subsidies and fully deregulate the downstream sector, because the subsidy is not making any positive impact on the sector and the citizens.

Foreign exchange should be made available to every player to enable them to compete in the market and ensure product availability at every station across the country.

Urgent steps must be officially taken to terminate the policy of subsidizing the pump price of petrol before June 2023.

In light of the foregoing, it is clear that the Federal Government doesn’t need to continue to pay petrol subsidy, which has become more and more unnecessary and fraudulent.

The current subsidized pricing is not sustainable and imposing the current prices on the pumps is like swimming against the tide because there is a limit that the government can suppress the market forces of demand and supply.

The subsidy policy has been weakened by the current situation where Nigerians are already paying between N300 and N650 per litre for the same product that is supposed to have been subsidized and be sold at N165.

The humongous amount spent in the guise of a subsidy regime is literally being used to subsidize inefficiency, corruption and consumption. These funds should be judiciously used for more productive activities that will directly impact the lives of citizens, most especially provision of infrastructural facilities.

The government must take the hard decision on the removal of fuel subsidy as it can no longer sustain it.

The current situation where some petrol stations dispense petrol above the subsidized rate could be the government’s way of ‘testing’ the market to gauge citizens’ reaction before taking the hard decision of removing the subsidy.

The opportunity to let go of subsidy payments on fuel must not be missed at this point. We must refuse to play the Ostrich but confront the reality of the situation as it currently stares us in the face.