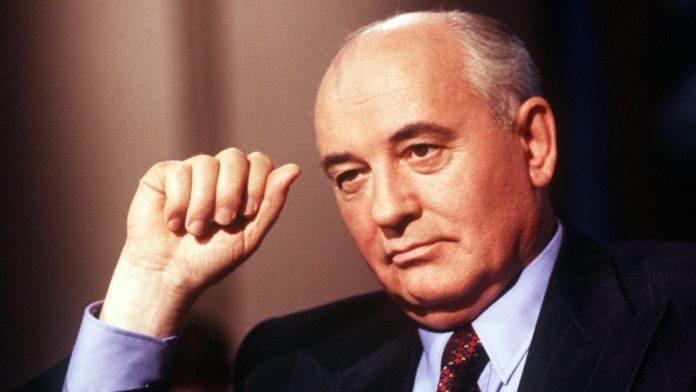 Mikhail Sergeyevich Gorbachev, the Soviet president who ended the Cold War without bloodshed but failed to prevent the collapse of the Soviet Union, died on Tuesday at the age of 91.

He passed away after a serious and protracted disease.

The hospital in Moscow where he died said he had been suffering from a long and serious illness.

In June, international media reported that he had been admitted after suffering from a kidney ailment, though his cause of death has not been announced.

Gorbachev was born on March 2, 1931 in the Stavropol region of southern Russia.

His parents both worked on collective farms and the young Gorbachev operated combine harvesters while in his teens.

By the time he graduated from Moscow State University in 1955 he was an active member of the Communist Party.

He was brought up in rural southern Russia

On his return to Stavropol with his new wife Raisa, he began a rapid rise through the regional party structure.

Gorbachev was one of a new generation of party activists who became increasingly impatient with the ageing figures at the top of the Soviet hierarchy.

By 1961 he was regional secretary of the Young Communist League and had become a delegate to the Party Congress.

“Mikhail Gorbachev was a one-of-a-kind statesman. The world has lost a towering global leader, committed multilateralist, and tireless advocate for peace”

His role as an agricultural administrator gave him the opportunity to introduce innovations and this, coupled with his status in the party, gave him considerable influence in the region.

Gorbachev took power in 1985 and introduced reforms, as well as opening up the Soviet Union to the world.

But he was unable to prevent the slow collapse of the union, and many Russians blamed him for the years of turmoil that ensued.

Outside Russia, he was widely respected, with the United Nations Secretary-General Antonio Guterres saying he had “changed the course of history”.

“Mikhail Gorbachev was a one-of-a-kind statesman. The world has lost a towering global leader, committed multilateralist, and tireless advocate for peace,” Guterres said.

World leaders were also quick to pay tribute to the departed Russian leader.

European Commission chief Ursula von der Leyen said Gorbachev, who was awarded the Nobel Peace Prize in 1990, had opened the way for a free Europe.

U.S. President, Joe Biden said he had believed in “glasnost and perestroika – openness and restructuring – not as mere slogans, but as the path forward for the people of the Soviet Union after so many years of isolation and deprivation.”

President Muhammadu Buhari of Nigeria described him as “a courageous reformer who will be remembered for years to come because of his immeasurable contributions to world peace and openness in his own once rigidly closed society.”

As the last Soviet president, Gorbachev forged arms reduction deals with the United States and partnerships with Western powers to remove the Iron Curtain that had divided Europe since World War Two and brought about the reunification of Germany.

He is seen in the West as an architect of reform who created the conditions for the end of the Cold War in 1991 – a time of deep tensions between the Soviet Union and Western nations, including the US and Britain.

He was awarded the Nobel Peace Prize in 1990 “for the leading role he played in the radical changes in East-West relations”.

But in the new Russia that emerged after 1991, he was on the fringes of politics, focusing on educational and humanitarian projects.

Gorbachev made one ill-fated attempt to return to political life in 1996, receiving just 0.5% of the vote in presidential elections.

But his internal reforms helped weaken the Soviet Union to the point where it fell apart, a moment that President Vladimir Putin has called the “greatest geopolitical catastrophe” of the twentieth century.

After decades of Cold War tension and confrontation, Gorbachev brought the Soviet Union closer to the West than at any point since World War Two.

He gave freedom to hundreds of millions of people in Russia and around it, and also half of Europe.

Gorbachev saw his legacy wrecked late in life, as the invasion of Ukraine brought Western sanctions crashing down on Moscow, and politicians in both Russia and the West began to speak of a new Cold War.

“Gorbachev died in a symbolic way when his life’s work, freedom, was effectively destroyed by Putin,” said Andrei Kolesnikov, senior fellow at the Carnegie Endowment for International Peace.

When pro-democracy protests rocked Soviet bloc nations in communist Eastern Europe in 1989, Gorbachev refrained from using force – unlike previous Kremlin leaders who had sent tanks to crush uprisings in Hungary in 1956 and Czechoslovakia in 1968.

But the protests fuelled aspirations for autonomy in the 15 republics of the Soviet Union, which disintegrated over the next two years in chaotic fashion.

Gorbachev – who was briefly deposed in an August 1991 coup by party hardliners – struggled vainly to prevent that collapse.

Gorbachev’s policy of “glasnost” allowed previously unthinkable criticism of the party and the state, but also emboldened nationalists who began to press for independence in the Baltic republics of Latvia, Lithuania, Estonia and elsewhere.

Many Russians never forgave Gorbachev for the turbulence that his reforms unleashed, considering the subsequent plunge in their living standards too high a price to pay for democracy.

Gorbachev was a politician and statesman who had a tremendous influence on the course of world history.

He led the country to a time of “dramatic change” and recognised the great need for reform at the time.

Gorbachev would be remembered in history as a man who started historic transformations that were to the benefit of mankind and to the Russian people.

EDITORIAL: Nigeria @ 62: A country in despair