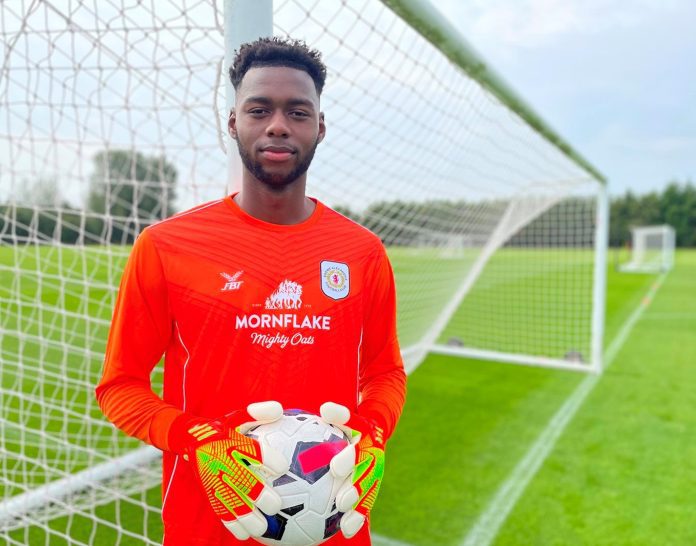 Arsenal-owned Nigerian goalkeeper Arthur Okonkwo has made his senior debut, a day after his signing was confirmed by Crewe Alexandra.

Aged 20 years and 324 days, the Hale End Academy graduate started for the Railwaymen as they defeated Rochdale 2-1 in the opening round of matches in the EFL League Two at the weekend.

It was an impressive performance by Okonkwo considering that he trained with his new teammates for only one day before the trip to the Crown Oil Arena.

Daniel Agyei opened his account for the season in the fourteenth minute as he guided a header into the top corner and Brook doubled the advantage midway through the first half when he rifled a shot into the bottom corner.

Rochdale pulled a goal back through Devante Rodney, who slotted home from close range in the 69th minute.

In the 75th minute, Okonkwo pulled off a fantastic stop to deny James Ball from close range and three minutes from time, Brierley’s free-kick was flicked goalwards by Sinclair but held by the Arsenal loanee.

Prior to his senior debut, the 6ft 6in glovesman was named in ten matchday squads at Arsenal, including three in the Europa League, without getting a taste of action.

Meanwhile, two former Flying Eagles invitees in the shape of Korede Adedoyin and Fisayo Dele-Bashiru found the net for Accrington Stanley and Sheffield Wednesday respectively on the opening day of the Football League season.

In a League One tie at the Wham Stadium in Lancashire, Accrington Stanley and Charlton Athletic shared the spoils with a 2-2 draw.

Everton academy product Adedoyin was the hero for the home team as he salvaged a point with a 96th minute equaliser.

With defeat looming after Miles Leaburn struck in the 94th minute, the Nigerian-born winger scored from close range to secure a point for Accrington Stanley.

The 21-year-old has now netted two career goals for The Reds in the League One since joining them from Sheffield Wednesday in the January transfer window.

Dele-Bashiru restored the Owls lead in the 52nd minute and with nine minutes remaining fired in an unstoppable shot from distance to make it 3-3.

Dele-Bashiru and his pal Korede trained with the Flying Eagles in Germany before the 2019 FIFA U20 World Cup.