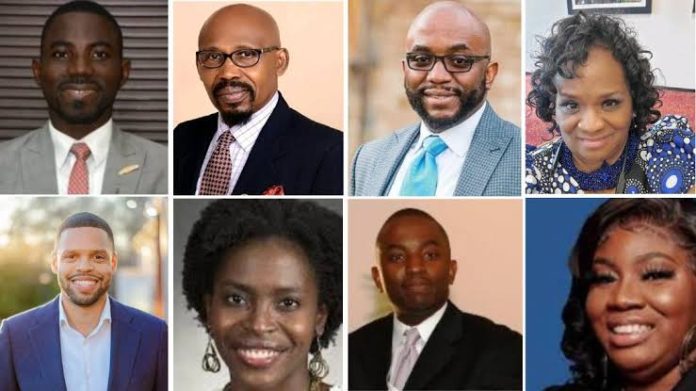 No fewer than eight politicians of Nigerian descent won their legislative seats on Tuesday night during Georgia, Pennsylvania and Minnesota State elections, in the United State of America.

This was also confirmed by the chairman of the Nigerian Diaspora Commission, Abike Dabiri-Erewa on Twitter.

“These Nigerian Americans won their elections in Georgia last night. A hearty congrats to them all #ProudlyNigerian.

The US state of Georgia general election was held on Tuesday, November 8, 2022, with runoffs to be held at a later date for those races which are not yet decided by majority vote.

Adeoye “Oye” Owolewa is a Nigerian-American politician, pharmacist, and a member of the Democratic Party.

In November 2020, he was elected as the shadow representative of the United States House of Representatives from the District of Columbia. As a shadow congressperson, Owolewa is tasked with lobbying for D.C. statehood; the unpaid position was authorized by D.C. voters in 1982, but never approved by Congress.

Although mistakenly described in Nigerian media as the first Nigerian-American to be elected to the U.S. Congress, Owolewa is not a member of Congress.

Reacting, President Muhammadu Buhari, congratulated them on their victory and prayed for their successful tenure in office.

He thanked them for their invaluable support and partnerships, over the years, with groups affiliated with the ideals and objectives of Nigerians in Diaspora associations in the United States.

The president also restated his unflinching support for every Nigerian excelling at home and abroad.

According to him, compatriots who succeed in good causes are assets to the nation and the continent, noting that their contributions will always be remembered and celebrated.