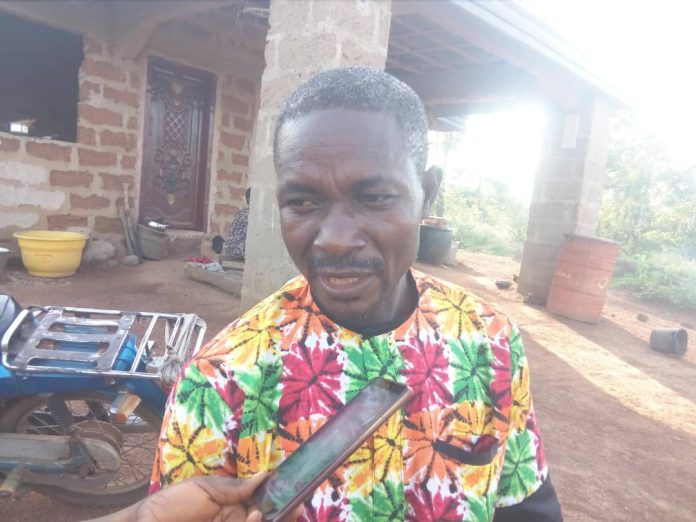 No one informed me my daughter owed – Father

A primary one pupil of, Nduigwe Igbeagu in Izzi Local Government Area of Ebonyi State, Becky Agada, has lost her life after the school management sent her home during school hours to fetch the sum of N300 for a workbook from her parents.

It was gathered that the eight-year-old-girl was crushed to death by a hit-and-run-driver on her way home on June 7, 2022 along the Abakaliki-Ogoja Highway.

In an interview with The Point, the bereaved, Emmanuel Okechukwu-Agada, said that the school management did not tell him about the outstanding bill earlier when he brought his children to school that day.

He claimed that he had always ensured that his children’s school fees were paid in record time, adding that if Becky’s teacher or any other staff of the school had informed him of the N300 for the assessment workbook, he would have paid.

Though the father-of-six disclosed that he had no intention of suing the school management for what he termed as negligence on their part, he said that the development revealed that the private school was operating at substandard level as a mushroom school.

To this end, he urged the Ebonyi State Government to address the issue of proliferation of mushroom and substandard schools in the state.

He also called for the training and retraining of teachers on the modern trends in school management in order to ensure efficiency in service delivery.

He said that “Because our house is far from the school, I normally take Becky and my two other children to school with my motorcycle. I take them there every working day and bring them back by 2pm myself. I take them to school before going for my own business in Abakaliki town. That day, I took them there as usual and handed them over to one of the teachers before I left for my business.

“Nobody told me that my child owed the school because I had cleared their school fees. To my greatest surprise, when I left, they sent Becky away from school to go home and bring N300 for an assessment workbook. Remember, the school didn’t tell me about the need for that money when I brought them to school.

“Nobody told me that my child owed the school because I had cleared their school fees. To my greatest surprise, when I left, they sent Becky away from school to go home and bring N300 for an assessment workbook. Remember, the school didn’t tell me about the need for that money when I brought them to school”

“Would it be out of place for the management to call me on the phone? Or better still, they would have told me when I return to school by 2pm to take my children instead of sending my daughter to go and die untimely in the hands of a hit-and-run driver.”

On how the news of his daughter’s death was broken to him, he explained that, “Around 11 or 12pm, some people started calling me to come home that Becky had an accident. I left all I was doing in town and came back to see my daughter half dead. She was, after some time, referred to St Vincent Hospital, Ndubia for better medical care but on our way, she gave up the ghost.

“The management (of the school) was not fair to me at all. What did I do to them to warrant the death of my daughter in such a manner? I paid their fees promptly. Even when we relocated to my own house far from the school, I still left my children in the school and suffered to take them there and bring them back daily.

“When I went to the school to see the teacher who sent her home without telling me about the debt, I was made to understand that it was the proprietress who gave the order that all those who had not paid the said N300 be sent home, shortly after I left the school that day.

“My heart was so heavy, how I wished there was still an option left to bring her back to life.

“I will not sue them to court for the murder of my child or for damages but let their minds judge them. No amount of suits filed in court would bring back my Becky to life. I am struggling to swallow the bitter reality of my loss. But, I want the Ebonyi State Government to look into the rate of proliferation of mushroom and substandard schools in the state. That proprietress should be brought to order. She should be taught how best to run a school for the progress of the children, not just to make money.

“The Ministry of Education should be up and doing with supervision without any compromise. Schools that are not up to standard should be compelled to meet up or be closed down. There should be no room for negligence of duty by the management. That caused me to miss my lovely daughter. There should be training and retraining of teachers on the current trends for effective and efficient teaching and learning processes, because our children are the leaders of tomorrow.”

The victim’s mother, Okechukwu Agada, decried the untimely death of her daughter whom she described as her closest helper, saying that it would take her a long time to get over the pains of her demise.

Efforts to reach the school proprietress as well as the Commissioner for Education in the state, Sunday Nwangele, for comments were not successful.