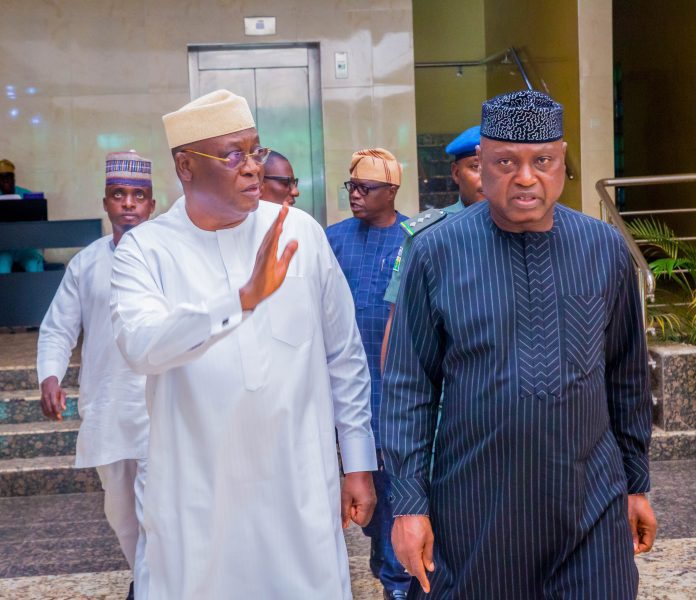 … As Oyebanji urges support for the family

A Special valedictory plenary session was held Thursday in honour of the late Speaker of Ekiti State House of Assembly, Rt. Hon. Funminiyi Afuye, by members of the House amidst encomiums for the late politician,

At the emotion-laden plenary which held at the State House of Assembly Complex, Ado-Ekiti, Ekiti State Governor, Mr Biodun Oyebanji, described the late speaker as leader of a formidable team that contributed immensely to the development of Ekiti State in particular and Nigeria in general.

The Governor who described the late speaker as a reliable friend and party man, said the deceased was a tireless advocate of good governance, who in the last 30 years had committed his time, energy and resources to the development of the State and the country at large.

He noted that the late Speaker epitomized the finest of Ekiti character with his amiable disposition to issues. This he said made possible for him to lead a matured, highly productive and rancour-free Assembly as he enjoyed absolute confidence of his colleagues.

While urging the wife and children to take solace in the fact that their father chose to serve humanity and the state, the Governor said late Afuye’s had successfully etched his name in gold.

The Governor urged friends, associates and family members of the deceased to support the wife and children of the late Speaker, adding that that is the only way they could show their love and respect for him.

“Rt. Hon. Funminiyi Afuye was my very good brother and his death is so painful. I saw him on the morning of his demise. I went to the hospital to see him and I spoke with him and I was confident he would improve because he had the best of medical attention. So, I had no fear that he would pull through but once its God’s time, there is nothing we can do. As we mourn, we should also cast our minds on the fulfilled life that he lived.

“My relationship with the Rt. Hon. Speaker has been long and cordial since the days of Afenifere and Alliance for Democracy. He had always been a progressive politician of an uncommon commitment and belonged among the most decent of men and principled politicians.

“If we truly love the late Speaker, this is the time to show it by supporting the wife and children he left behind. I urge all friends, family and associates to support the family,” Oyebanji said.

Earlier in his opening speech, the Deputy Speaker, Rt. Hon. Hakeem Jamiu who expressed pain at the news of the demise of the late speaker described him as a wonderful personality, straight forward, brilliant, intellectually endowed, and devoid of pettiness.

Jamiu commended Afuye for the mature way he handled the affairs of the Sixth Assembly which makes it the most peaceful and vibrant assembly in Nigeria with an unprecedented 89 bills passed into law in less than four years.

Rt. Hon. Sulaiman Abubakar, the Speaker, Bauchi State House of Assembly described the late Afuye as a great parliamentarian with high spirit of patriotism and great humility filled with life and energy to achieve greatness in life.

Abubakar, who spoke on behalf of the Nigerian Conference of Speakers, noted several contribution of late Rt. Hon. Funminiyi Afuye to the conference and Nigeria with particular reference to a committee he chaired which looked at the issue of ecological problems faced by the states and was happy that the committee came up with tangible proposal.

In their respective goodwill messages, Special Adviser on Political matters to the President, Senator Babafemi Ojudu, Speakers of Assemblies, former and present members of the Ekiti Assembly, described the late Afuye as a passionate, consistent and disciplined democrat who contributed his quota to the development of the state and Nigeria.

Among those who attended the plenary were the Deputy Governor, Mrs Monisade Afuye, members of the state executive council, members of National and State Assemblies, representatives of Conference of Speakers represented by Speakers of Osun, Oyo, Ondo, Lagos, Kwara, Kogi, Bauchi as well as members of the first to fifth assemblies of Ekiti state.

Afuye, who died on Wednesday, October 19, 2022 at the Ekiti State Teaching Hospital, Ado-Ekiti after suffering Cardiac arrest would be laid to rest on Friday at his country home, Ikere Ekiti.