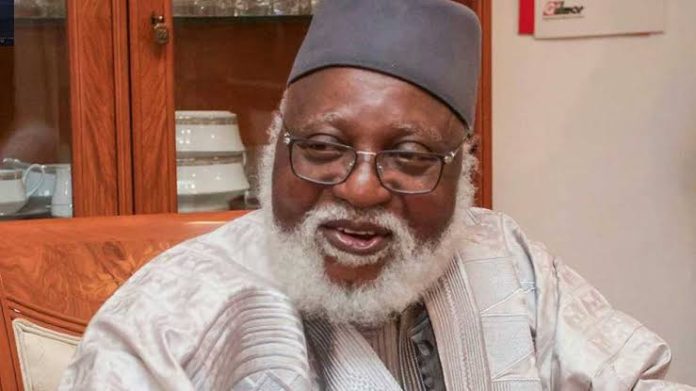 A former Head of States and Chairman National Peace Committee, retired General Abdulsalami Abubakar, has advised eligible Nigerians not to sell their voters card during the 2023 general elections.

Abubakar spoke to newsmen shortly after a closed door meeting of the National Peace Committee meeting in Minna on Thursday.

“I appeal to Nigerians, especially the electorate, to conduct themselves in a peaceful manner as the programme of electoral process is about to be implemented.

“Don’t sell your votes but vote for credible leaders that would provide basic infrastructure that would enhance the wellbeing of Nigerians”, Abdulsalami said.

He said that it was only through the peaceful conduct of the electoral process that credible and honest elected representatives would emerge.

“If we want to have it good, we must work towards electing responsible people to manage our nation’s resources for optimal performance”, he said.

He said that the desired objectives of having good democratic governance would only be possible if eligible Nigerians would shun all kinds of violence and not engage in selling their voter’s cards.

He also called on politicians, especially those seeking elective positions, to play responsible politics during and after general elections.

He said that this would only be possible if the political class could mobilise their followers to shun all kinds of violence and thuggery.

Chairman of the Independent National Electoral Commission, Mahmoud Yakubu, said that the commission was fully prepared to conduct free, fair and credible elections.

He also called on politicians to cooperate with the commission for the successful implementation of the electoral process.

He appealed to the media to sensitive eligible Nigerians to the dangers involved in political violence and thuggery.

“We at the commission are battle ready to provide a level-playing platform for the smooth implementation of all the electoral process,” he said.

Aliko Dangote and Femi Otedola are also part of the stakeholder’s forum for peaceful conduct of political campaigns across the country. (NAN)