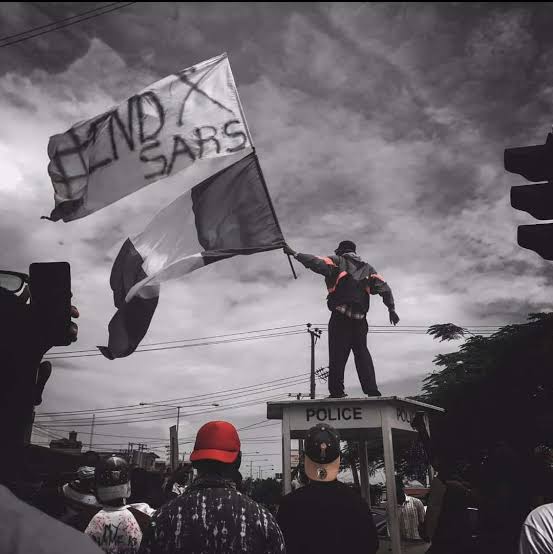 The Police on Thursday fired tear gas at youths on a memorial procession at the Lekki Tollgate to mark the second anniversary of the shooting that claimed many lives during the EndSars protests in 2020.

The Point recalls that exactly two years ago the entire nation was thrown into lamentation following shootings in the Lekki Tollgate allegedly carried out by the Nigerian Army to stop the youths protesting against police brutality.

Several Nigerians, including Amnesty International, alleged that officers of the Nigerian Army shot at the protesters.

The youths returned to the same venue on Thursday in commemoration of the sad event.

Although the gathering at the Lekki toll gate was planned as a peaceful march, a large number of policemen were deployed at the scene.

Among them was rapper, Folarin Falana also known as Falz, social media influencer Feyikemi Abudu, and comedian, Adebowale Adebayo, also known as Mr. Macaroni. They marched through the toll gate twice from Lekki Phase One to Oriental Hotel.

The group moved in two lines allowing vehicles to pass.

Falz said the essence of the march was to pay respects to those who lost their lives at the toll gate two years ago.

He said, “We are here to commemorate the lives of the ones that we lost to the hands of police brutality and to also ask for justice because justice has not been done and nobody has been punished or brought to book.

“A panel was set up and recommendations were made by this panel and it said people were killed and members of the Nigerian Army were culpable. The most important aim is to remember some of the bravest people that we ever had in this country.”

In Osun State, heavy security deployment at strategic locations in Osogbo, capital of Osun State, might have prevented protests in the state as Nigerian youths marked two years’ memorial of Endsars.

Security operatives, as early as 6:00am on Thursday, had taken to major areas in Osogbo and embarked on show of force, apparently to scare the intended protesters away.

At Olaiya, Old Garage, Oke-Fia areas among others, heavily armed policemen were seen patrolling while some others stationed their operational vehicles strategically.

One of the leading faces of the Endsars movement in the state, Emmanuel Adebisi, said some youths would have demonstrated to mark the memorial event but to alleged massive deployment of security operatives and threats.

Adebisi told The Point that, “some of us have not forgotten the blood of our fallen heroes by having their memorial. But, it’s quite unfortunate that some people are still feeding on the unfortunate occurrence. What we have in Osun for this memorial is not encouraging because this protest didn’t start in a hall. It started on the street and we should have marked the memorial protest on the street.

“Some are saying that Endsars protest didn’t have leaders and that was why it ended the way it did, but I am saying it didn’t have leaders because it wasn’t a paid protest. We started the Endsars movement in Osun following the killing of two guys in Osogbo. Some of the people posing as leaders of the movement today were invited by us. They have become cankerworms to the movement and lend themselves to politicians.

“The state government is telling us that they have compensated but the families of Azeez and Fresh who were killed by police are still languishing without compensation. My case is still in court from 2020 till date and that’s because I can’t dance to the tunes of politicians. We will continue to raise our voices against bad leadership.

“In Lagos, Ibadan and other cities went to the street but here in Osun where the Endsars started, gathered in the hall. We were supposed to go out but this morning, the number of police dispatched was massive. One of us, Wale, was arrested this morning so that he won’t mobilise a protest. He was later released. We were threatened against public protest,” he added.

Speaking at a memorial event organised by Osun Civil Society Movement with the theme: “Nigeria is Ours to Drive…A Better Narrative” in Osogbo, a lawyer, Ibrahim Lawal, urged government not to wait for any issue to get out of hand before initiating reforms once there is public consensus that a system is not working.

The Chief Press Secretary to Osun State Governor, Ismail Omipidan, said the government had compensated victims of police brutality adding that the state is one of the very few states that achieved the feat, adding that concerns of youths have been prioritized by the incumbent administration.