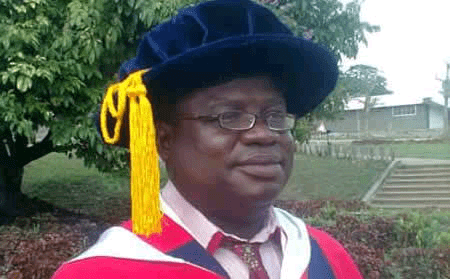 A former Registrar of the Federal Polytechnic, Ede, Dr Oladele Alhassan Ogunleye, has dragged the incumbent Rector of the institution, Dr John Taiwo Adekolawole to court over a case of gun running.

In the fresh suit, the former registrar demanded a sum of Two Hundred and Fifty-Five Million Naira (N255,000,000) as damages against his person.

Recall that the former registrar was arrested in connection with an allegation of attempted assassination of three people in the polytechnic community.

Ogunleye said the rector concocted the gun running and assassination attempt allegations against him because he allegedly refused to join him misappropriating funds belonging to the institution.

After a thorough investigation by the police, the security men exonerated Ogunleye having found out the allegation to be false.

The plaintiff (Ogunleye) approached Osun State High Court sitting in Osogbo with a 70 paragraph affidavit which was signed by his lawyer, Kanmi Ajibola and demanded general damages in the sum of N255,000,000 for false allegation and defamation of character of the plaintiff by the defendant (Adekolawole) when the defendant published that the immediate past Rector, Builder Patrick Hussein procured a pump action gun which was likely given to the Registrar.

Adekolawole had claimed the former Registrar took his name to some herbalists in Koton Karfe, Kogi State with the view to eliminating him by spiritual means which the herbalists allegedly rejected on the ground that the rector was an innocent man.

The rector also alleged that Ogunleye made several attempts to have extra marital affairs with his (Adekolawole) wife many years back.

“The plaintiff claims against the defendant as follows: General damages in the sum of Two Hundred and Fifty Million Naira [N250,000,000=00] for false allegation and the defamation of character of the plaintiff by the defendant, when the defendant published of the plaintiff the following words: ‘’Bldr P. M. Hussein, the immediate past Rector procured a pump action gun which was likely given to the Registrar.’’

‘’The Registrar took my name to some herbalists in Koton Karfe, Kogi State with the view to eliminate me through spiritual means which the herbalists rejected on the ground that the Rector was an innocent man.’’
‘’The Registrar made several attempts to have extra marital sex affairs with my wife many years back.’’

“An order of perpetual injunction restraining the defendant by himself, his servants, agents and privies or otherwise howsoever called from further uttering defamatory words or giving damaging recommendation against the plaintiff or printing or causing to be printed and published in any local, National and International newspapers and magazines or flyers and pamphlets in any manner circulate the said or any similar libel of and concerning the plaintiff. The sum of Five Million Naira (N5, 000,000=00) being the cost of this Suit,” the suit reads.

Meanwhile, the writ of summon served on Adekolawole stated that the rector has 42 days to appear before the court to defend all the allegations he levelled against Ogunleye.