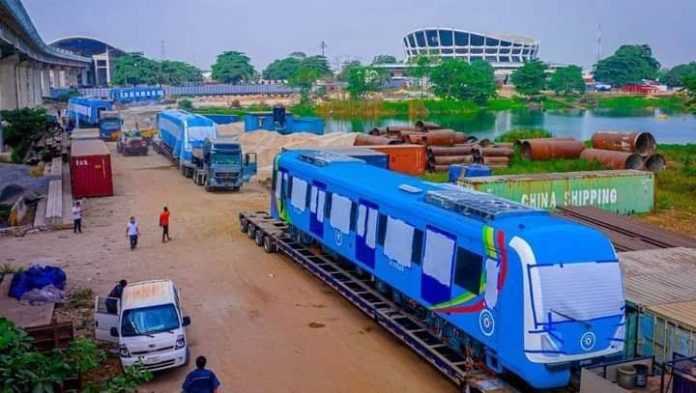 The public transport system in Lagos State is set to wear a new face as the Lagos Rail Mass Transit Blue Rail Line project will be officially launched on Tuesday, January 24, in Marina.

With the first phase now completed, President Muhammadu Buhari is expected to officially inaugurate the project already acknowledged by residents as landmark.

As the city struggles with traffic congestion which has taken its toll on residents, the Blue Line Rail project is expected to bring some succour.

Some Lagos residents, who spoke to the News Agency of Nigeria, said the completion of the project was a milestone achievement, adding that they were eager for operations to start.

They, however, urged the state government to put adequate security and maintenance measures in place to ensure smooth operations.

A resident, Olorunfemi Olorunmoni, said that the project was long overdue and would help in addressing some of the transportation problems in the state.

“The Blue Line rail construction has been going on for a while and the expectations of residents are very high, considering the road situation in Lagos.

“I believe this will go a long way to solve transportation problem, especially between Badagry and Marina.

“Though, it has not extended to Badagry, these centres are where there are heavy movement of human traffic.

“I believe with this coming on board now, it will seriously address the problem attached to movement of people and goods along this axis,” he said.

Olorunmoni, however, suggested that there should be adequate maintenance and management of the infrastructure.

“All the guiding principles, in terms of management and maintenance, should be put in place. The commuters should also be well informed on how to conduct themselves,” he said.

Similarly, another resident, Andy Enaohwo, said that the project, when inaugurated, would reduce the traffic and robberies experienced on the roads.

“The time expenditure per day will reduce; people will get to their places of work and return home on time.

“Majority of people will no longer take their cars out; they will park them at train stations and take the train to the Island,” he said.

He hoped that there would be security network like Closed Circuit TV to monitor whatever that was happening within the train at any given time.

He urged the government to create more awareness about the train and make the cost affordable to residents.

“If they can consider making the cost affordable to the masses, we will patronise them. It is our property, we will safeguard it too,” Enaohwo said.

Also, James Adaji, who works at the Artist Village located within the National Arts Theatre Complex, said that the security around the premises should be improved.

“We are already experiencing some criminal activities around the premises; our offices are being burgled as a result of increased movement at the theatre.

“When they inaugurate the project, the government should ensure adequate security in terms of policing and protection of government properties and staff,” he said.

Another Lagos resident, Ita Okon, said that the project was a welcome development and would boost the economy of the state.

NAN reports that the Blue Line is a 27-kilometre rail system from Marina to Okokomaiko.

Its construction was divided into phases for ease of implementation.

On December 21, 2022, Governor Babajide Sanwo-Olu commemorated the completion of the civil infrastructure for the first phase of the project at the National Arts Theatre, Iganmu.

The first phase is a 13-kilometer stretch from Marina to Mile 2, covering five stations and will be powered by electricity from an Independent Power Plant.

The project is being constructed by the China Civil Engineering Construction Corporation and managed by the Lagos Metropolitan Area Transport Authority.

The first phase of the Lagos rail line has five stations at Mile 2, Suru-Alaba, Orile Iganmu, National Theatre, and Marina, and is expected to move about 250,000 passengers daily when its operations commence. (NAN)