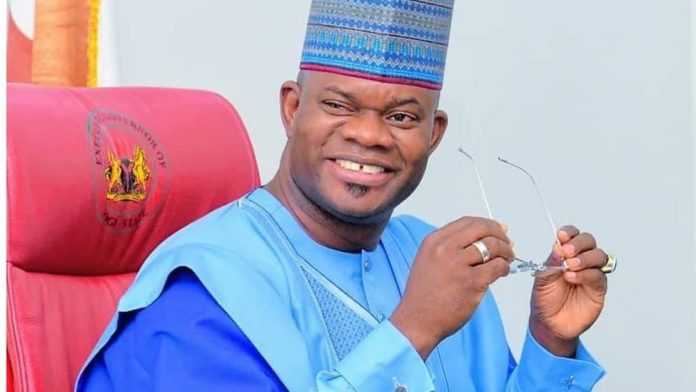 Today our dear country Nigeria has clocked 62 years of Independence from British colonial rule. For most Nigerians, especially those born after the Civil War, it has been 62 years of cautious optimism in the search for a functional nationhood. Be that as it may, and despite the ups and downs, it has also been 62 years of compassion and mercy from the Almighty God. For that and for everything, we are grateful.

For us in Kogi State, and as you will come to see in the course of this Extraordinary Address, this year’s Independence Day is going to be very low key. Still, let me use this opportunity to felicitate with all Kogites on a year that has seen us translate more of our Blueprint into real projects in all sectors, many of which have become available for your use, while many others are receiving finishing touches for commissioning before the end of the year.

This is the essence of governance to me and it is in line with my solemn promise during my first Inaugural Address in 2016 – that all of Kogi’s resources will be put to work for all of Kogi’s people. What we have been able to accomplish will not deter us from embarking on even more ambitious projects and doing more, much more, between now and when we hand over to a worthy successor in 2023 whom we trust to sustain and even accelerate the momentum of development we have set.

Today, I am deeply distressed by the scope of devastation and suffering that has already been visited on our people by the rising floodwaters this year. As predicted by the Nigerian Meteorological Agency (NIMET) and the Nigeria Hydrological Services Agency (NIHSA) the 2022 floods are considerably heavier than usual so there is a need for more coordinated action.

The flooding has affected the nine (9) local government areas which lie along the Rivers Niger and Benue, namely, Lokoja, Kogi-Koto, Ajaokuta, Ofu, Igalamela-Odolu, Bassa, Idah, Ibaji and Omala. Ibaji is almost 100% under water while the rest range from 30% up. Other inland LGAs also have some degree of flooding from smaller rivers and tributaries.

We therefore have a serious and humanitarian tragedy on our hands, but I wish to assure every person, family and community which has been affected that they are not alone and that help is coming. Even before the floods came we had activated our early response systems to make sure that succour reaches those affected in a timely manner.

Even though we are still mapping the red zones as they develop, the Kogi State Emergency Management Agency (KOGISEMA) and other first responders are already hard at work across the state. At-risk communities were informed and encouraged to evacuate long before the flooding began and Internally Displaced Persons Camps were set up and put at their disposal.

We are also mobilizing help from traditional partners such as the National Emergency Management Agency, the Federal Ministry of Humanitarian Services, Disaster Management and Social Development as well as socially responsible corporate entities. Of course, the Kogi State Government will welcome public-spirited individuals, groups and bodies who may wish to show love to their fellow humans in distress through donations of funds and essentials.

What this means is that in the short term we are providing affected persons and communities with shelter at our various Internally Displaced Persons (IDP) Camps, as well as security, food, medicines, clothing and cash grants for necessities, among others. In the long term, we will need to gear efforts towards more sustainable solutions where possible.

The 2022 floods have been confirmed as Nigeria’s worst flood disaster in a decade, and they are becoming progressively worse than those of 2012 and 2018. Inasmuch as my administration has implemented Flood Early Warning Systems (FEWS) and efforts are ongoing to evacuate and provide relief for victims, we must now admit that more is needed from the Federal Government of Nigeria.

Accordingly, I make a passionate appeal to the Father of the Nation, His Excellency, President Muhammadu Buhari, GCFR to declare a State of National Disaster Due To Flooding in Kogi and other similarly affected states. The declaration will help to unlock the nation’s latent capabilities to respond more aggressively with more men, money and materials to this harrowing situation.

The President may wish to recall that he made such a declaration in response to the 2018 flooding – and the floods this year are projected to be much worse than anything we saw in 2018. Thus, while thanking His Excellency for what the federal agencies are already doing, I implore him to give us the help our people so desperately need at this time.

Historically, flooding in Kogi State is more or less an annual event. Our people have gotten used to the ritual of devastation followed by inadequate palliatives, if any. As a leader, it is clear to me that I must make an attempt to break this vicious cycle, if not for all, then for as many victims as I can. This is why I am now considering some proposals that promise permanent solutions that we can deploy.
Do not misunderstand me. There is a set of common sense and civil engineering solutions to the problem of flooding which could bring permanent solutions and I assure you that as an administration we have tried some of them, with varying degrees of success.

For instance, in partnership with the Nigeria Erosion and Watershed Management Project (NEWMAP), we have constructed about four kilometres of embankments along the River Niger. We also did extensive gully erosion control projects in Ankpa, Ogugu, Ozuri, Lokoja, Dekina and other parts of the State. Despite all of that, as everyone can see, we continue to harvest this endless cycle of flood disaster every other year.

The most common sense and humane option left now is to clear human habitations and businesses from the banks of the Rivers Niger and Benue where possible. Soon, we will embark on clearing the lowlands along the entire flood-plains in the flood endemic LGAs. This will allow the rivers unimpeded flow during their annual flooding.

In Lokoja, we will have to widen the road shoulders along the banks of the River Niger as one enters the city from the NATACO area in order to establish a sufficient buffer zone between the city and the river. Ganaja junction to Ganaja Village road has also been recently re-awarded to a more efficient contractor and we will see to it that when work commences efforts will be made to raise the road above the water levels.

In the process, affected communities will be relocated to higher grounds and structures which fall into the designated work areas will have to make way. I assure you all that the government will ensure proper resettlement and rehabilitation of those who will be affected. No doubt, this will put huge burdens on the resources of the government but it will be money well-spent if it brings peace of mind to my people.

FloodList, an international publication which tracks flooding across the world confirms terrible flooding on practically all continents. Nigeria, Cameroon, Mali, Pakistan, Spain, China, India, the United States, and many others have all experienced flood disasters this year.

Speaking generally, the reality is that until mankind can find a solution to the global problem of climate change, it is time to do things differently so we can achieve a different and more sustainable outcome for our people.

Over the next couple of weeks, we will be putting finishing touches to the work plans for this rescue operation, and as soon as the waters begin to recede into the dry season, we will start work. These are hard decisions but they are necessary for us to end this suffering for our people. They will also help us to see quicker the resilient and smart city we want our state capital to become over the next 32 years for which we are already developing a Plan of action.

Without mincing words, I say that anything is preferable to this annual loss of lives and livelihood and I assure us that my administration will continue to work for the wellbeing of ourselves and our posterity in this state. I hope I can count on the sacrifice and understanding of everyone.

I wish to commiserate with the good people of Ankpa who were visited with a different type of tragedy on Wednesday 28th when brake failure reportedly caused the driver of a fuel tanker to lose control and his vehicle overturned. Sadly, the resulting fire incident claimed lives, injured others and caused extensive property damage. We pray for the repose of the souls of those who died and quick recovery for those injured and comfort for their loved ones.

We sent a high-powered delegation to visit the city and assess the damage and the government is already helping the people. Once again, I deplore in the strongest terms possible senseless tragedies like this one which befall Kogi State from time to time because fuel tankers are either driven recklessly or lacking in basic maintenance. We will henceforth hold companies directly responsible for such incidents by their drivers.

On another sad note, we received news of the passing of His Royal Highness, the Maigari of Lokoja, Alhaji Dr Muhammad Kabir Maikarfi III, OON on Wednesday the 28th day of September, 2022. His Royal Highness was aged 80 years old at the time of his departure. He was a true father, friend, and advisor, and a veritable compendium of wisdom, who will be dearly missed.

My heartfelt condolences to the good people of Lokoja, Kogi West and the entire Kogi State on this irreplaceable loss. May the Almighty God forgive all his shortcomings and grant him Al Jannatul Firdaus.

All in all, despite the challenges we are facing, we have also seen plenty of good things and good times and Kogi State has a lot of reasons to be grateful to the Almighty God this 1st of October, 2022. I call on all of us to engage in introspection and prayers, especially of thanksgiving and guidance, for Nigeria and for our forthcoming General Elections in 2023. We shall triumph.

Happy Independence Day to Kogites and to our compatriots all over Nigeria.

To God be the Glory! 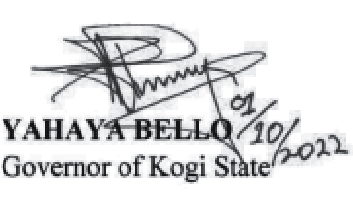