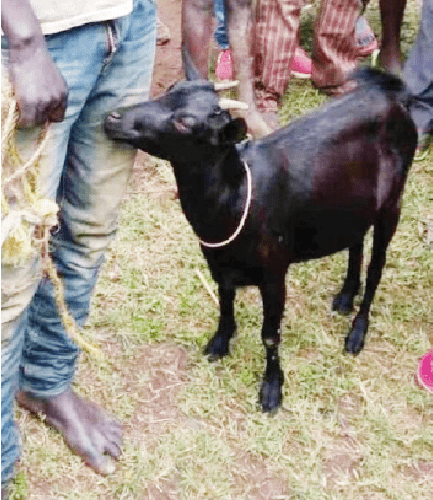 A father, Francis Chukwuma Ogali, has been sentenced for two years imprisonment for allegedly partaking in the eating of goats stolen by his son in Ebonyi State.

Ogali’s 10-year-old son was said to have captured two goats belonging to a resident of their community named Ezuma Kenneth on August 27, 2022 in Izziokwu village, Amachi community in Abakaliki Local Government Area of the state.

The minor was said to have killed, dressed and prepared dinner with the goat meat. He subsequently served his father the food when he returned from the farm.

Ogali, a widower, was said to have eaten the meal without enquiring how his son got the meat. It was alleged that the man was in the habit of sending his children to steal while he would feign ignorance.

Both the father and his son were arraigned before a Magistrate’s Court sitting in Abakaliki. His son, a Primary 2 pupil of Amachi Community Primary School, confirmed that he killed and cooked the goats for dinner.

The boy, who said that he saw the goats in the forest, claimed that he assumed that they were used for sacrifice.

The father and his son pleaded guilty to the two counts of conspiracy and stealing slammed against them without being legally represented.

The charge read that “You (defendants) on the 27th day of August 2022 at Izziokwu village Amachi community in the Abakaliki Magisterial district, did conspire amongst yourselves to commit felony to wit stealing and thereby committed an offence punishable under Section 516(a) of the Criminal Code, Cap 33, Volume 1 Laws of Ebonyi State of Nigeria 2009.

“You, on the same date and time, did steal two goats valued at N100,000 (One hundred thousand naira) only property of one Ezuma Kenneth and thereby committed an offence punishable Section 390(9) of the Criminal Code, Cap 33, Volume 1 Laws of Ebonyi State of Nigeria 2009.”

During the hearing, Ogali explained that he returned from the day’s work late at night and was very hungry to ask questions about the stolen meat before eating them.

He prayed the court to release him so that he could sell some parcels of his land to pay for the stolen goats.

Kenneth, one of the prosecution witnesses who is the owner of the stolen goats, said that Ogali and his children were notorious thieves.

He alleged that the convict had been paraded and flogged at the village square on several occasions for stealing.

In order to cover their tracks, Kenneth said that the convicts buried the leftover of the goat meat in a shallow grave behind their compound.

The police prosecutor, Sergeant Obi Eberechukwu, tendered the confessional statements made by the man and his son, as well as pictures of the crime to the court.

The Magistrate, Happiness Chima, sentenced Ogali to two years in jail with option of N100, 000 fines. The convict’s son was pardoned on the account that he was a minor.

The court put the minor in the care of the complainant, their ward councillor and his relatives.