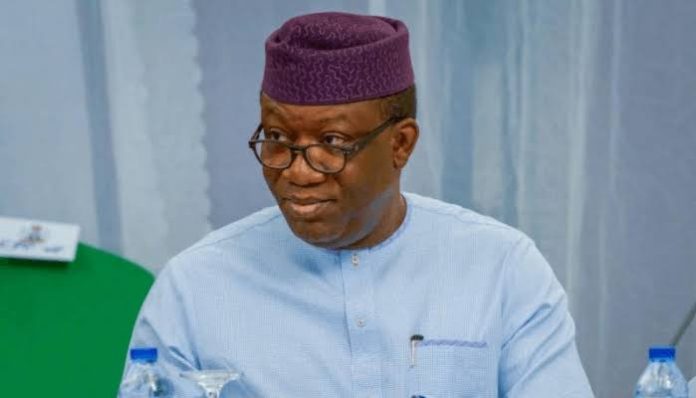 The immediate past Ekiti State Governor, John Kayode Fayemi, on Monday, inaugurated network of roads in Osogbo, capital of Osun State, and described achievements of the Osun Governor, Gboyega Oyetola, as magical and commendable.

The administration of Governor Oyetola had in the last few weeks embarked on a massive inauguration of roads across the state as part of efforts to further enhance the socioeconomic activities of the people of the state.

The newly-completed roads inaugurated by Fayemi are Osogbo-Agunbelewo-Okinni-Ilobu-Ifon-Osun and Kelebe-Osogbo-Iragbiji roads.

Inaugurating the newly-completed roads, Fayemi applauded Oyetola for keeping faith with his electoral promises even in the face of daunting socio-economic challenges.

Fayemi who acknowledged the tremendous achievements of the Oyetola-led government in the state said it was worthy of note that the government has made the impossible to be possible and turned difficulties to opportunities since assumption of office.

The former Chairman of the Nigeria Governors’ Forum who described Oyetola as a man loved by all, said his exceptional character vis-a-vis socio-political wizardry has been a veritable source of inspiration to many, most importantly his governor colleagues.

Fayemi averred that the achievements made by Oyetola within four years of his first term would continue to be enduring legacies in the history of the state as he had set the state on the path of socioeconomic pedestal and sure footing.

He said posterity would be kind to him as he journeys through to serve the sttate more than ever before.

“I was very delighted when I was asked if I would be available to honour you with my presence as the Special Guest of Honour at this inauguration ceremony. But I said this to Mr. Governor in private, ‘You need to know how much all of our colleagues admire you so much for what we called the magic wand?’

“I know this as the immediate past Chairman of the Nigeria Governors’ Forum, we know much of this State by way of the allocation. We know the burden of what you have been carrying since you assumed office, and if we are to do a mathematical equation vis-a-vis what you have been able to deliver on infrastructure, social welfare, good governance among others, you can only be a magician because your mathematics cannot produce an appropriate answer.

“In your own case, 2 plus 2 is 10, where you have the 6 is what we called magic. I must commend your creativity, innovation and huge sacrifice. People will not realize it now but I can assure you that history will be kind to you; posterity will serve you right as our people will eventually go to recognize all the sacrifices you have made on their behalf. You have been able to demonstrate the capacity to make good governance available,” Fayemi told Oyetola.

In his remarks, Oyetola restated his avowed commitment to continuously unleash infrastructure development on the state as a catalyst for the industrial revolution and part of the administration’s efforts at actualising the dream to making Osun the economic and industrial hub of the southwest.

The governor said his administration was resolute to continue to deliver on his promise until the last road in Osun is in good standing’.

“In the last three weeks, there have been collaboration and celebration of road infrastructure between Osun and the Governor of Oyo.

“The feat is a fulfillment of our collective resolve to bring development to the South West despite political differences. I thank my brother governors in the South West for their leadership across our region and especially Governor Fayemi for demonstrating the same feat across the country during his tenure as the chairman of the country’s governors forum.

“Today’s inauguration is a further fulfillment of our administration’s avowed resolve to unleash infrastructure development on the State as a catalyst for the industrial revolution that we envisioned and part of our dream to make Osun the economic and industrial hub of the South West.

“It is also a fulfillment of the desire of our Administration to fix all failed road infrastructure not minding the classification, whether they are Federal, State or Local Government, for the comfort of citizens and residents of Osun and for further enhancement of the socioeconomic activities of the good people of the State.

“I must reiterate that the complete deterioration of this road before our intervention impacted negatively on the socioeconomic profile of the people living along this route for several years, with the attendant suffering and underdevelopment of the citizens causing huge loss on investments,” Oyetola added.