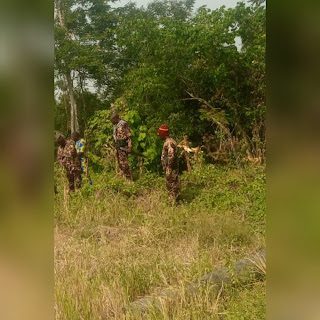 Residents of Osogbo, capital of Osun State have been thrown into panic following a new format kidnapping adopted by gunmen in the state.

Their fear was necessitated by the abduction of a housewife simply identified as Gbemisola at her home in Osogbo.

The State Command of the Amotekun Corps, on Sunday, said Gbemisola was kidnapped in her residence at Technical College Area, Osogbo on Friday.

A statement by the Command’s spokesperson, Idowu Yusuf, said operatives has commenced a search for the housewife abducted by some yet-to-be-identified gunmen.

According to Yusuf, the incident was reported to Amotekun leadership in the state on Saturday by the husband of the victim.

The statement assured that Amotekun operatives would intensify efforts to rescue the victim, adding that the perpetrators would also be apprehended.

“The Osun Amotekun Field Commander, Mr Amitolu Shittu, received a distress call around 1:15 am on Saturday from the victim’s husband, Mr Ojo, a staff of NNPC on the disappearance of his wife.

“Amotekun operatives immediately swung into action in search of the victim. The Field Commander, Shittu assured the inhabitants of the state that the woman would be rescued and the perpetrators brought to book,” the statement read in parts.

Gbemisola’s abduction came less than two days after two farmers were kidnapped by gunmen in Ileogbo area of the state.

The farmers, identified as Samuel Oladotun and Fashola Tobiloba, were reportedly abducted last Wednesday while returning from their farms.

A security source who requested not to be named said the farmers were travelling alongside seven others when the kidnappers attacked their vehicle in Oke-Osun area, Ileogbo.

The source further added that the other seven victims escaped but the kidnappers went away with the two farmers.

The Field Commander of Amotekun in Osun State, Amitolu Shittu, confirmed the incident.

Shittu said the Amotekun personnel were combing the forest linking Ileogbo area for the victims and their abductors.

Despite efforts by security operatives, the victims were yet to be rescued as at the time of this report.

In 2022, there were several cases of abduction along the Gbongan-Ibadan express road and Ilesa-Osogbo highway.

A resident of Osogbo, Mustapha Ajeigbe, in an interview with The Point on Sunday, bemoaned the incidents and called on the state government and security agencies to nip the trend in the bud.

Expressing fear in the same vein, another resident, Ololade Baderin, said it was becoming worrisome as kidnappers now prowl within the state capital.

She said, “The state government and security agencies should come to our aids. We are afraid because these kidnappers now enter people’s houses and abduct them. This should be stopped.”