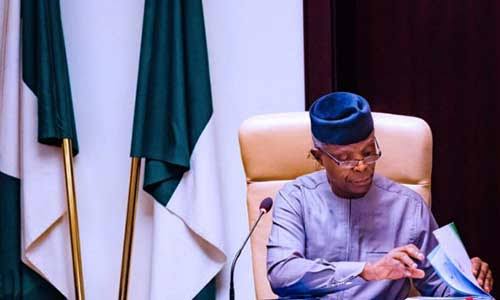 The Federal Executive Council on Wednesday approved a contract for the construction of a new office block and parking lot worth over N14.88 billion for the Federal Inland Revenue Service (FIRS).

The Minister of State for Budget and National Planning, Clement Agba, disclosed this after the Council meeting presided over by Vice President, Yemi Osinbajo, at the State House.

Agba told State House Correspondents that the construction of the 12 storey building would save FIRS N4 billion annual rent and decongest traffic along Awolowo Road.

The Council also approved the creation of a database of the National Capital Projects Information System of Government, to track the growing abandoned and uncompleted projects across the country, particularly, in the last five years, which drains national funds.

The National Capital Projects and Information System, which involves key infrastructure ministries, is to be headed by the Finance Minister to prioritize and fund selected projects on a yearly basis and possibly privatize some of the projects, repurposed some for alternative use, and completely abandon others (depending on the outcome of investigations) treating them as a sunk cost.

Meanwhile, the Minister of Agriculture, Mohammad Abubakar, has stated that the government is working to decrease the inflation rate in the country, primarily through subsidizing fertilizer, improving production, and preventing smuggling of farm products among other strategies.

He again debunked claims that the nation would experience a food shortage in 2023.