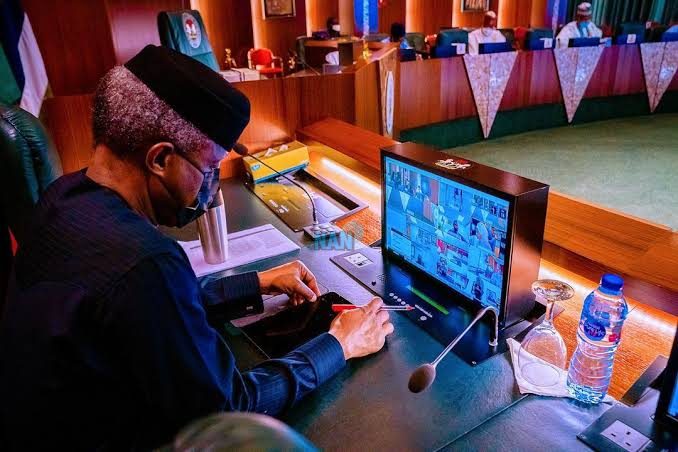 The Federal Executive Council presided over by Vice President Yemi Osinbajo has approved the variation order for the East West road project sections 1-4 from N246 billion to N506 billion.

Laolu Akande, Senior Special Assistant to the President on Media and Publicity, Office of the Vice President, briefed State House correspondents after the FEC meeting on Wednesday at the Presidential Villa, Abuja.

Akande said that the Minister for works and Housing, Babatunde Fashola, presented a memo in line with Federal Government’s continued engagement in bringing succour and resolving issues around the recent flooding.

“He got approval for the variation order in respect of repair works on the East West road project affected during the recent flooding occurrences in the Niger Delta.

“So, the approval was for a variation order for the East West road project sections 1-4 from Warri to Port Harcourt, Eket, Oron, including Oron-Eket bypass in the sum of N260 billion, thereby increasing the total contract sum for the outstanding sections 1-4 of the East West road projects from the sum of formerly of N246 billion now to N506 billion.

“The memo was approved.’’

Akande said that the Minister for Works and Housing got approval for the award of contracts for the urgent repairs, and special general maintenance of a few roads nationwide.

He said the approval included the construction of Gogora Guru Road in Yobe state, in the sum of N40 billion, with the completion time of 36 months.

“He also got approval for the rehabilitation of the 90 kilometre Buni Gari Gulani road also in Yobe state in the sum of N4 billion with a completion period of 36 months.’’

The Senior Special Assistant added the minister got approval for urgent repairs in some roads also for the reconstruction of the water cooperation drive at Trinity Avenue Victoria Island Lagos State.

“That too was also approved in the sum of N2 billion with a completion period of 36 months.’’

He added that the minister also got approval for the award of contract for the dualisation and reconstruction of the Kano-Kwana-Ganja-Adeja road in Kano and Jigawa States, section Kano to Salu.

“This was approved in the sum of N94 billion inclusive of 7.5 per cent VAT with a completion period of 24 months,’’ he said.

FEC has also approved the setting up of a space museum and planetarium in Abuja.

Minister of Science and Technology and Innovation, Adeleke Mamora said this while briefing newsmen at the end of Wednesday’s cabinet meeting.

Planetarium is a theatre built for the presentation of education and entertainment on space science.

He said the project would cost N3.5 billion, but at no cost to the Nigerian government.

Mamora said that the project being handled under Public-Private Partnership would be sited at the premises of National Space Research and Development Agency in Abuja.

“Ministry of Science, Technology and Innovation presented a memo to the council in respect of the Public-Private Partnership brought by one of our agencies and that is NASRDA.

“The memo is essentially to secure partnership on the upgrade, equipping and marketing of the space museum and planetarium.

“And the buildings meant for this project have been in place since 2018; but because of non-availability of funds to put the necessary equipment in place, the project has been stalled,’’ he said.

The minister said Wednesday’s decision rode on the directive of President Muhammadu Buhari at the National Space Council meeting earlier in the year.

He said the president directed at the meeting that the director-general of NASRDA should explore and exploit collaboration with the private sector.

He added that a proposal was received from a private company in Nigeria.

This is to the processes in terms of outlining a business case ensuring compliance with all the requirements needed to present the memo before the cabinet.

“Fortunately, the memo was approved and the cost of the project is about N3.5 billion and it is at no cost to the government; the project will last for about 15 years when, thereafter, it reverts to the Federal Government.

“The buildings I am referring to are located at the NASDRA premises here in Abuja,’’ he said.

Mamora said that the project would provide jobs for more than 200 people and provide an opportunity for learning experience in science, technology, engineering and mathematics. (NAN)