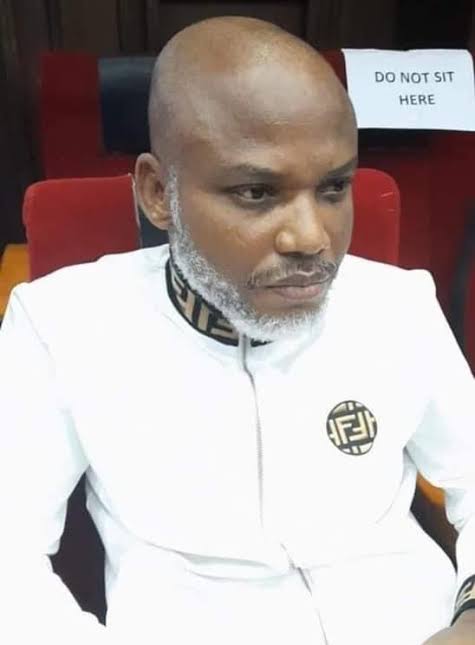 The Federal Government has appealed the judgment of the Appeal Court freeing the leader of the Indigenous People of Biafra, Nnamdi Kanu.

The government in a motion for a stay of execution filed on Wednesday at the apex court is asking the court to stop the execution of the Appeal Court judgment of October 13.

The Appeal Court had acquitted the IPOB leader and barred any lower court from entertaining further charges against him.

In a seven-ground notice of appeal which was filed by the office of the Attorney-General of the Federation, the Federal Government did not only fault the lower court’s decision, it also prayed that it should be set aside.

The Point recalls that a three-man panel of Appeal Court Justices led by Oludotun Adefope-Okojie on Thursday, October 13, while delivering judgment in Kanu’s appeal on his extraordinary rendition declared it as unlawful.

The court also quashed the charges bordering on terrorism and treasonable felony preferred against him by the Federal Government.

The Appeal Court held that the Federal Government breached all known local and international laws in the forceful rendition of Kanu to Nigeria, thereby making the terrorism charge against him incompetent and unlawful.

The judgment was on an appeal marked: CA/ABJ/CR/625/2022 filed by Kanu against an earlier ruling by Justice Binta Nyako of the Federal High Court, Abuja.

Justice Adefope-Okojie while delivering judgment declared Kanu’s abduction from Kenya and his subsequent return to Nigeria as illegal and unlawful.

He proceeded to quash the seven counts left of the initial 15 counts filed by the Federal Government.

Justice Binta Nyako of the Federal High Court had in an earlier ruling quashed eight out of the 15 counts, leaving seven for determination.

But the Appeal Court in its ruling held that the Federal Government violated all laws in the forceful rendition of Kanu to Nigeria, thus invalidating the charges.

“By the illegal abduction and extra-ordinary rendition of the appellant, there was a clear violation, by the respondent (Federal Government) of international treaties, conventions, as well as the African Charter on Human and Peoples Rights,” the court held.

The court added that having flagrantly breached Kanu’s fundamental rights, the Federal Government lost the legal right to put him on trial, adding the trial court, therefore, lacked the jurisdiction to try the appellant on the retained counts of the charge.

“No court can try him going by the circumstances of the extraordinary rendition,” the court held.

Justice Adefope-Okojie, however, declared that “having resolved issue one in favour of the appellant, which deals with jurisdiction, the appeal succeeds”.

“The order of Justice Binta Nyako which ordered the appellant to answer to counts 1, 2, 3, 4, 5, 8 and 15 is set aside, terminated and dismissed.

But the Federal Government in its grounds of appeal argued, among others, that the Court of Appeal erred when it faulted the manner by which Kanu was brought back to face trial after he jumped bail and fled the country.

It contended further that the Court of Appeal erred when it struck out the pending charge against Kanu on the ground that the trial court no longer possessed the requisite jurisdiction to continue the trial because of the manner by which Kanu was returned to the country after allegedly jumping bail.

The court has yet to fix a date for the hearing of the motion for the stay of execution.