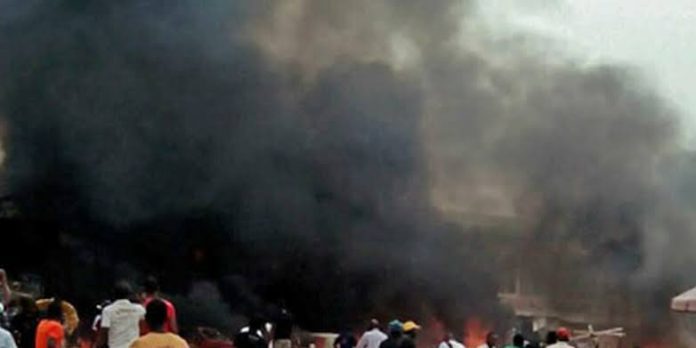 The incident took place three days after the parish priest of St Peter and Paul Catholic Church, Kafin-koro, Reverend Father Isaac Achi, was burnt to death by terrorists who invaded the parish’s residence.

Trouble began when some Evangelical Church of West Africa (ECWA) and Catholic women groups converged on the premises of the burnt parish as early as 7 am on Tuesday to pray against those who gruesomely murdered Rev Achi.

But a police detachment from the Kafin-koro Police Division was drafted to the church, stating it was directed to provide protection for the praying congregation.

But the angry residents grew livid over the inability of the police to respond on time and prevent the death of the Rev. Father. The women, therefore, refused and resisted the protection provided by the police.

The women were said to have accused the police of not doing anything to rescue the late Reverend Father and asked the operatives to leave.

The women threw stones and sachet water at the police to state their point, forcing the operatives to retreat to their station.

After the prayers, some youths joined the women to march peacefully through the major roads of the town to the Police Division, chanting anti-police slogans to register their grievances.

They asked the police to leave the town, alleging their presence was of no security value to the community.

To disperse the crowd, the police began shooting into the air with one of the bullets said to have hit a middle-aged man who died immediately on the spot, turning the protest into a violent one.

In the course of the protest, some unidentified people set the Police Division on fire, leading to the burning down of the entire building.

In the ensuing confrontation with the police, some unidentified protesters were said to have burnt the entire police station.

Efforts to get the comments of the State Government and the Niger Police Command did not yield any fruits as at the time of filing this report.