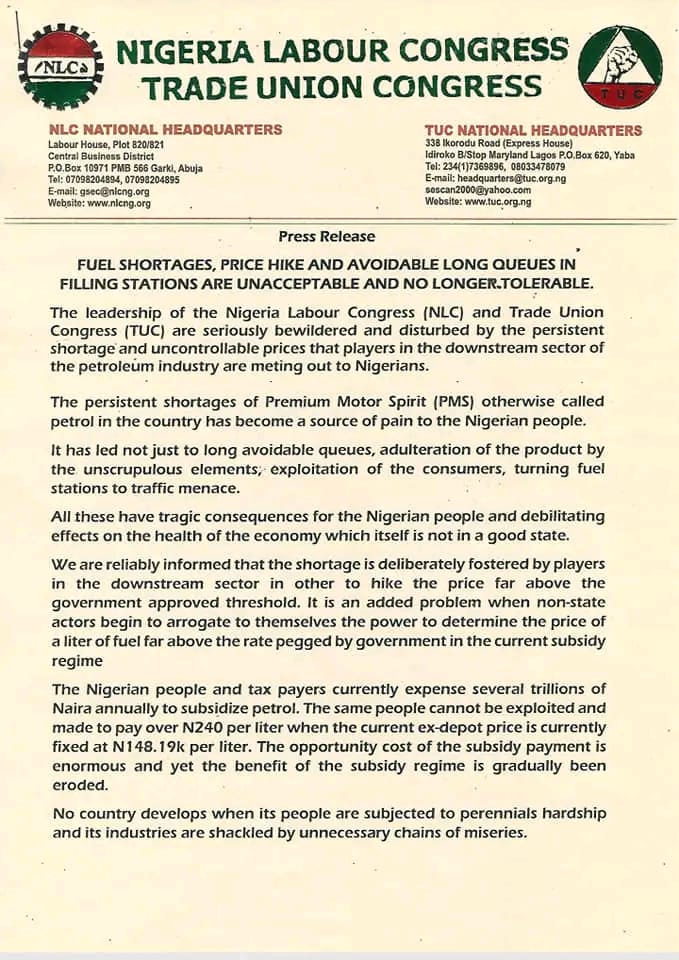 The Nigeria Labour Congress and Trade Union Congress have urged the Federal Government to put an end to the fuel shortages and price hikes in the country.

The Presidents of NLC and the TUC, Ayuba Wabba and Festus Osifo said this in a statement, signed by them on Saturday in Abuja.

They said that the fuel shortages, price hikes and avoidable long queues in filling stations are unacceptable and no longer tolerable.

The labour leaders said the Federal Government should put an end to the avoidable, unnecessary, crippling and pain-inducing fuel shortages and unapproved price hikes of up to N240 per litre in the country.

They warned that “No excuse is good enough to cripple the country.”

“If there are challenges, they should be fixed. We have a government in power to fix challenges not to make excuses,’’ they said in their statement.

The statement said the labour leaders were bewildered and disturbed by the persistent shortage and uncontrollable prices that players in the downstream sector of the petroleum industry were meting out to Nigerians.

It noted that the persistent shortages of Premium Motor Spirit, otherwise called petrol, had become a source of pain to the Nigerian people.

It said this had led not just to long avoidable queues, but to adulteration of the product by unscrupulous elements, exploitation of the consumers and turning fuel stations to traffic menace.

“All these have tragic consequences for the Nigerian people and debilitating effects on the health of the economy which itself is not in a good state.

“We are reliably informed that the shortage is deliberately fostered by players in the downstream sector in other to hike the price far above the government-approved threshold.

“It is an added problem when non-state actors begin to arrogate to themselves the power to determine the price of a litre of fuel far above the rate pegged by government in the current subsidy regime,” it said.

The labour leaders also said that the Nigerian people and the taxpayers currently spend trillions of Naira annually to subsidise petrol.

They added that the same people could not be exploited and made to pay over N240 per litre when the current ex-depot price was N148.19k per litre.

According to them, no country develops when its people are subjected to perennial hardship and its industries are shackled by unnecessary chains of miseries.

“It is more disturbing that the government is equally demonstrating a high level of culpability in the unwholesome situation by its silence and unwillingness to frontally and publicly address the harrowing experiences in the current situation.

“No concerned and responsive government will bury its head in the sands like the proverbial Ostrich while the citizens are being brutally exploited.

“We are strongly worried that leaving our energy security and sovereignty in the hands of unscrupulous capitalists and their collaborators will further plunge this nation into the economic abyss we are working hard to avoid,” it said.

The statement said that Organised Labour is ready and willing to engage the Federal Government and assist in all ways possible to overcome the country’s present challenges.

It called on the regulatory and law enforcement agencies to do more to protect Nigerians from exploitation. 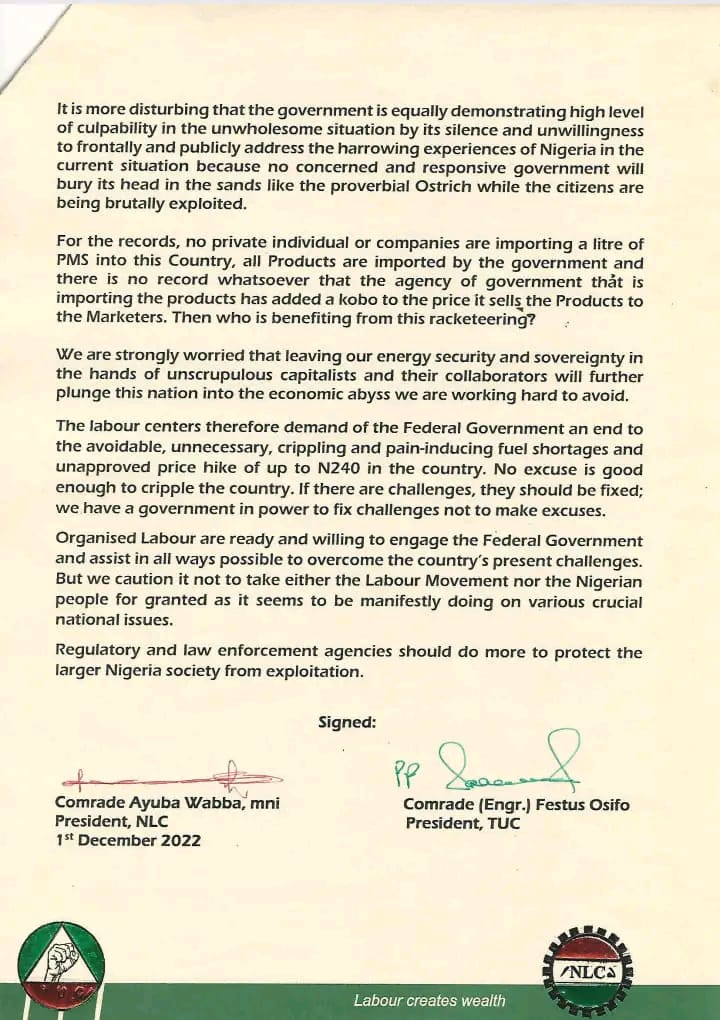