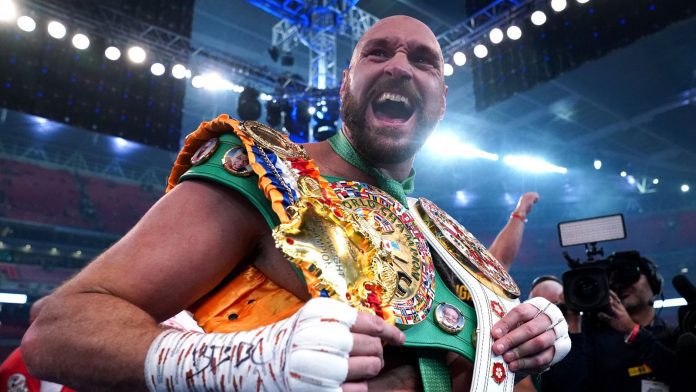 Tyson Fury has claimed Anthony Joshua “didn’t want” a world heavyweight title fight – and is keen to “smash” Derek Chisora if the pair clash for a third time in December.

Fury’s eagerly-awaited showdown with Joshua, the former WBA, IBF and WBO champion, fell through earlier this week after a breakdown in talks between the rival camps.

However, Chisora, who lost twice to Fury earlier in his career and recently confronted the WBC champion at ringside, is among the candidates to take him on again, with a December fight due to be finalised next week.

Reflecting on the collapse of his proposed fight with Joshua, Fury said, “He didn’t want the fight and didn’t push it and didn’t sign the contract.

“In my opinion, and this is being brutally honest – lack of b***s from AJ and lack of being assertive.

“If you’re a man, you be assertive with your team and make sure it’s done.”

Fury has pledged to return to the ring on Saturday December 3 and says he wants to complete a trilogy against Chisora.

The 38-year-old’s previous challenge for the WBC crown ended unsuccessfully against Vitali Klitschko in 2012.

“After his latest antics, I hope it is him,” said Fury. “Unfortunately for him, if he signs a contract I’m going to have to severely smash his teeth in. We’ll see.

“We’re going to announce an opponent next week. There’s four or five guys in the hat, a couple of southpaws in there, a couple of orthodox so we’ll decide who it’s going to be – there’s a few contracts been sent out to different people.

“We want a good entertaining night. I’m doing a fight in December which I’m not looking past and who knows, I might retire again after it.”