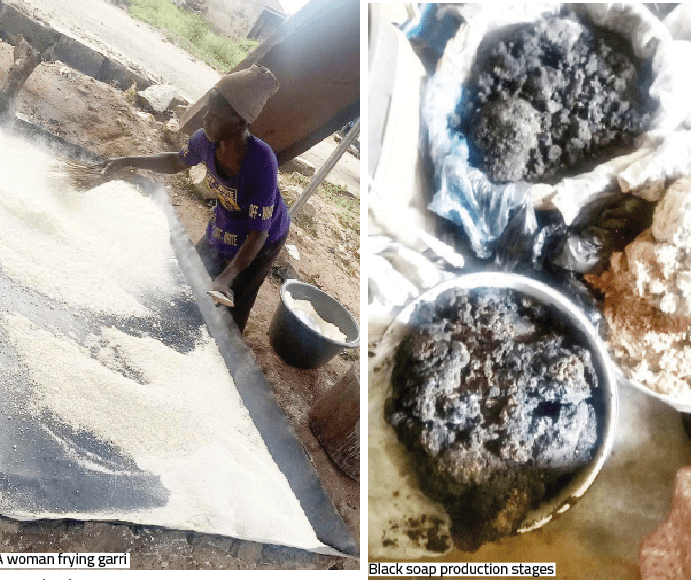 Local staple food producers in Ada community, Boripe Local Government Area of Osun State, have appealed to Governor Ademola Adeleke of Osun State for support in a bid to boost their businesses.

The call is said to be in tandem with the five-point-agenda of the current administration in the state articulated as ‘Boosting state economy by business partnering and support for business class.’
The local producers, mostly women, comprising garri and black soap makers said that they were in dire need of support from the state government to boost their ventures as well as the economy of Osun State.

Checks by The Point correspondent showed that the local soap and garri producers were exposed to avoidable work hazards such as blindness and burns in the course of carrying out their duties.

They requested the state government to provide them with modern equipment and financial support to ease their job and boost their production capacity.

Ada community in Osun State has the biggest market in the council area where major food vendors and traders across the state come to buy food stuff.

Garri production is a major industry and main source of income generation for the inhabitants of the rural community just as is the case with other local areas in Nigeria.

Production of garri, which many people consider as very strenuous, is prevalent in Ada, a popular agrarian settlement in Osun State.

Nigeria as a major cassava producing country in the world pushed out over 47 million tons in 2013.

A 2017 study indicated that cassava production could help in moving the nation from the economic crisis being currently encountered.

With the high capacity for production of cassava, Nigerians benefit a lot as a result of the numerous usage of the arguably resilient food crop. Among other things, the tuber crop could be used to make foods such as cassava flour, fufu, garri, cassava chips, cassava bread and akpu.

The most reputable and commonly accepted is garri which is being consumed by the majority of people in the country as well as across Africa.

Though it can be used to make Eba, most people consume it simply as garri by taking it with water accompanied with sugar, groundnut, bean cake or moin-moin.

In the light of its high demand as a leading staple food, the increase in its price by 66 percent has taken a toll on the average Nigerians and the poor with cases of hunger, malnourishment and possibility of starvation to death springing up.

Checks by The Point showed that Ada indigenes are majorly commercial farmers with high specialization in cassava cultivation and production of garri in commercial quantity. Amazingly however, they still rely on the crude traditional system of production, thereby demeaning their efforts.

The people live on the fringe, depending on daily production for sustenance.

According to them, with strong support from the Osun State Government, real industrialization would be brought to bear in Ada as Garri Trading Zone.

This, the people said, would provide jobs for thousands of residents of the state and also generate huge revenue for the state government.

Lamenting the hazards that they confront in the production line, a middle-aged woman simply identified as ‘Mummy Iyabo,’ said that the local processes of frying garri, including the peeling of cassava and drying, subjected them to illnesses.

She said that some of the older producers of garri in the community are having bad eyesight as a result of over-exposure to heat and smoke from naked fire.

Asked about how they manage the situation, the woman said, “We are only trying to cope because we don’t have a choice. My mother was into the business of producing garri and I joined her when I was a teenager. If one can tolerate the stress, one would not lack money for self-sustenance because of high demand for garri from far and near.

“Most of the time, we fall sick due to stress. Some of our older ones are now down with eye problems due to over-exposure to fire and smoke. All this is because we produce in the traditional way. If the government can support us with modern equipment for production, and frying of garri, it would ease our pains and also attract more people to the business.

“We are the ones who plant the cassava by ourselves. That is why the raw materials are always easy for us to get. We would peel the cassava and grind it by ourselves. We would then fetch firewood to fry the garri. The frying part is the most stressful because the flame is bad for human eyes.”

Toyin Adebisi also corroborated the fact that the processing of garri is very stressful, saying that sometimes she would get so tired in the process.

She attributed the challenges being faced in garri production to paucity of funds.

For instance, she said that only a few people could afford to buy a cassava peeling machine because it is very costly.

Another garri producer, who did not volunteer her name, pleaded with the government at all levels to establish a large garri processing factory equipped with modern facilities for ease of production. She said that they needed equipment ranging from a peeling machine to a sieving machine, dryer and fryer.

“This would make it easy for us to produce garri in larger quantities and there would be easier connection between producers and buyers. If the government can do this, there would be job opportunities for the youth who are currently idle,” she said.

Similarly, producers of black soap in the community explained that the business would become advanced if the state government could fund it.

A soap maker, Folake Ibirogba, explained that the local soap can be used for bathing as it has antibiotic and antiseptic properties for protection from germs and for nourishment.

She, however, said that the process of soap making is strenuous. Therefore, she urged the government to support the soap makers in ensuring that the industry is advanced.

A soap maker, who pleaded anonymity, said that she disagreed with the opinion that black or local soap is meant for the older generation and unfit for the modern world.

She said, “I am a young lady and I make black soap. Though the process is stressful because at some point, we have to fetch fire wood and we would boil the materials for soap. It is hazardous to inhale the smoke and expose the eyes to fire. People should stop ascribing the making of black soap to older people. I am calling on the state government to look into the business of soap making with the aim of supporting us.

“The local soap could be better packaged as most of the modern soaps that we see in supermarkets. It is funny that some people see black soap as a fetish object. As a matter of fact, it nourishes the skin better than most of the so-called imported soaps. All that we need is government support. If we are supported, the industry would boost the economy of the state.”