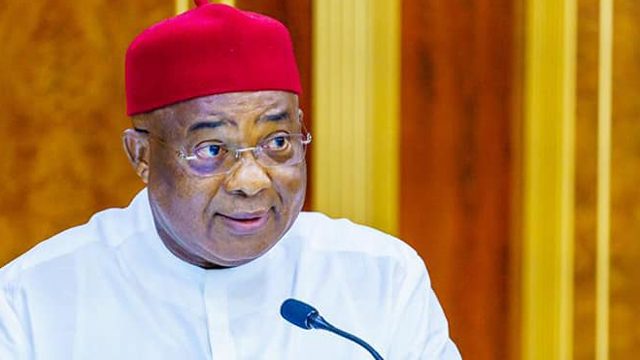 Convinced that killings in Imo State are politically contrived, Governor Hope Uzodimma has said he is confident that God will expose all those behind insecurity in Imo in general, if the people remain fervent in their prayer.

The Governor also urged the Church to be steadfast in prayer as the instruments of war used by the enemies of the people to kill and destroy cannot be compared with the strength of God Almighty who protects His people in times of difficulties.

The Governor spoke at the weekend in his remarks at the Admiral Ndubuisi Kanu Square in Owerri, on the occasion of the second edition of the annual ‘Imo Prays’ as the Special Guest.

Governor Uzodimma said he is to be contradicted that the insecurity in Imo State is politically contrived and prayed God to “arrest and expose all those involved in the dastardly act no matter who they are and where they are.”

The governor recalled that in the 2021 prayer session tagged “Imo Pray”, most of the hoodlums who burnt and released criminal inmates at the Owerri Correctional Centre, were arrested and hoped that “this year’s session will yield a better result.”

He said the Church is a partner in the search for solutions to problems and challenges of the society, noting that as a body known for peace making, the children of God have always been used to establish peace in Imo State.

Governor Uzodimma therefore called on the Church not to relent in their prayers because the “enemies are not relenting either.”

Governor Uzodimma emphasized that “prayer is the only potent weapon to overcome the enemies, the problems and challenges facing us as a people and the State in general,” adding that “the relative peace Imo State is experiencing currently is brought about by God’s intervention.”

Furthermore, he explained that “no State or Nation or government can thrive, prosper and develop if it is in a state of war, be it internal war or external war and no responsible government will put hand in bloodletting.”

Governor Uzodimma cited examples with what is happening in Somalia, Ethiopia and Yemen and the attendant human misery brought about by the war in Russia and Ukraine, and how development in those areas have been arrested by wars and insecurity.

However, he acknowledged that the development today in Imo State is gradually picking up because the State is relatively coming back to normal.

“And this has enabled the State to embark on many infrastructural developments, and is working hard to recover the years the locust had eaten,” he noted.

The Governor called attention of the brethren to the fact that the Government has spent a lot of money looking for peace and imagined what would have happened if the monies of the State were all channeled or deployed to development and other sectors of the economy.

He said: ‘’The Insecurity in Imo State and I can be quoted, is politically motivated,” and prayed that, “Almighty God will not only expose those people, but will arrest them wherever they are and whoever they are.”

The Governor also used the opportunity to once more appeal to those giving Imo people sleepless nights to consider the interest of the innocent citizens and stop their nefarious activities.