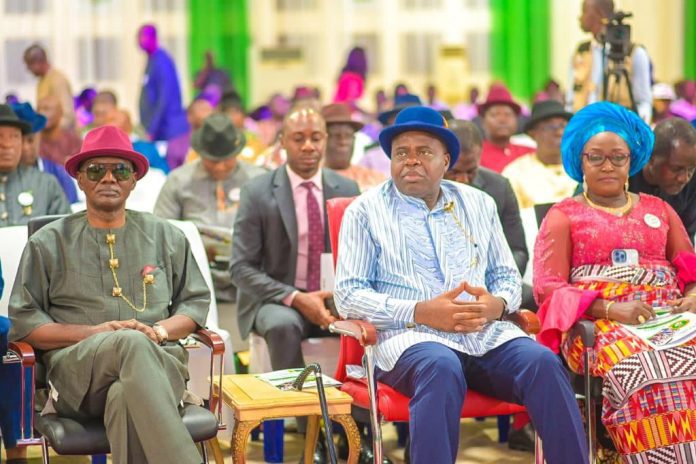 Bayelsa State Governor, Senator Douye Diri, has faulted the population figures attributed to the state by the National Population Commission, saying they were grossly under-estimated.

The Bayelsa governor also said the current population data for the country were inaccurate and called on the NPC to correct past census figures in the 2023 national census exercise.

Governor Diri stated this on Tuesday during the Stakeholders Summit on the 2023 Population and Housing Census held at the Chief DSP Alamieyeseigha Banquet Hall in Government House, Yenagoa.

Buttressing his claim, the governor stressed that the state had grown beyond the current structure of eight local government areas, noting that, for instance, the projected population of Yenagoa, the state capital, points to the fact that the state’s population was misrepresented.

His Chief Press Secretary, Daniel Alabrah, quoted the governor as saying that such faulty census figures were responsible for the under-representation of Bayelsa in the House of Representatives with only five members.

Senator Diri emphasised that due to its tremendous growth and contribution to the national economy as a result of its oil resources, Bayelsa deserved more federal presence.

“By the 2006 census figures, Bayelsa had a population of 1,704,515. That figure was not correct. But we are hopeful that the next exercise will give a more reliable and acceptable figure.

“Our government is convinced that the National Population Commission has the commitment and capacity to deliver to Nigerians and, indeed, to Bayelsa State very credible, reliable, valid and acceptable population figures.

“As a government, we are deeply concerned that Bayelsa has grown beyond the current structure of eight local governments. Clearly, we are under-represented in the House of Representatives with only five members. And the current projected population of Yenagoa points to these facts. Due of our exponential growth and contributions to the national economy from our oil resources, we deserve more federal presence.”

Diri said the NPC needed to realise that an accurate census was critical to the nation’s democracy and economy because it underpins fair representation in government and enable those in authority make appropriate funding for healthcare, schools, roads and other critical infrastructure.

The state’s helmsman added that population figure was one of the basic parameters in the sharing of revenue, particularly in Nigeria.

In her address, the Federal Commissioner, National Population Commission in charge of Bayelsa State, Mrs Gloria Izonfuo, hinted that the 2023 census would be fully digitalised in line with United Nations principles and recommendations for the 2020 Round of Population and Housing Censuses.

Izonfuo, who was a former Head of Service in Bayelsa, said the Commission had deployed technology to conduct the exercise and enhance data quality.

She expressed the Commission’s commitment to deliver credible and reliable census as well as ensuring that the results of the exercise are acceptable to Nigerians and the quality of the data to be generated meets international standards for planning and developmental purposes.

Izonfuo added that the stakeholders summit was the first of several meetings to be held on the state and thanked the government and people of the state for the support to the Commission.

In their goodwill messages, Speaker of the House of Assembly, Abraham Ingobere, the Commissioner of Police, Bayelsa State Command, Mr. Ben Okolo, and Chairman, Bayelsa State Founding Fathers, Chief Benedict Gwembe, said population census was strategic to enable government plan for every sector, including creation of more voting centres in the country.

They also stressed the need for more census enumerators to be deployed in the rural areas as well as provide sensitisation on the need for people to participate in the process.

They assured the Commission of their support to assist it conduct hitch-free and successful 2023 national population and housing census.