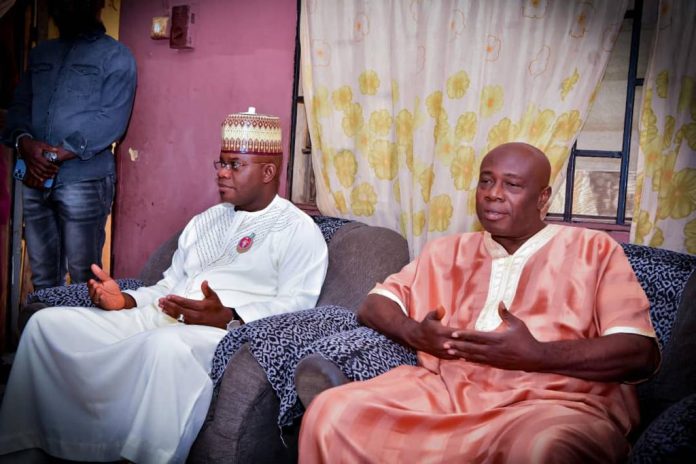 Governor Yahaya Bello of Kogi State, on Saturday, paid a condolence visit to the Chairman of the Nigeria Union of Journalists, Kogi State chapter, Adeiza Momohjimoh, whose wife, Zainab, passed on last Friday.

The governor, who was accompanied on the visit by his Chief of Staff, Abdulkareem Jamiu Asuku, and the Chairman of the All Progressives Congress in the state, Abdullahi Bello, among others, urged the NUJ chairman to be strong for the sake of the children his late wife left behind and the entire family.

He said his visit was also to pay his last respect to late Mallama Zainab Adeiza, whose death occured as it pleased God Almighty, despite the numerous efforts made to keep her alive.

The Governor said, “When I heard of the illness of your wife, I immediately directed my personal physician to intervene. And we undertook to foot the bill, 100 per cent, only to hear about her unfortunate demise.

“In fact, we were looking forward to having her as the first to be treated of such ailment in our Reference Hospital at Okene, but the unfortunate incident happened. From God Almighty we all came and to Him we shall return.”

Governor Bello assured the Chairman of the continued support of the Kogi State Government as well as colleagues of the NUJ chairman in his trying times.

In his remarks, the NUJ Chairman thanked the Governor, saying that his visit would facilitate his family’s recovery and considerably clear the air of despondency the death of his wife had caused.

He disclosed that the Governor called him thrice on the day of the unfortunate incident to commiserate with him and also sent money, promptly, to clear the hospital bill, noting that if he did not visit personally, he would have already done more than enough.

“I am short of words with your visit today, Your Excellency, with what you did at the hospital and throughout the period you discovered my wife was ill. The Governor called me three times on the day of the unfortunate incident and also sent money to us, promptly, to clear the hospital bill. I would not have expected that with all these, you would still visit my home because you have already done more than enough,” he stated.

While recounting his days with his late wife, Momohjimoh noted that he had not only lost a wife but a mother, describing her as someone who took care of those in distress and had many orphans under her care.

Special prayers were offered by the Chief of Staff to the Governor, Abdulkareem Jamiu Asuku, for the peaceful repose of the soul of the deceased, and for the family she left behind.