Pandemonium struck on Friday at Oke-Ijetu, Ilesa-Garage area of Osogbo, Osogbo Local Government Area of Osun State after a member of the National Union of Road Transport Workers popularly known as Spanal was shot dead.

A gang of gunmen attacked Spanal, a notorious thug among transporters in the state and shot him at his first wife’s shop at Ilesa Garage in the afternoon.

Spanal, a close ally of the Chairman of the Osogbo branch of NURTW, Kazeem Oyewale, popularly called Asiri Eniba, was said to have been shot dead alongside his 7-year-old daughter, identified as Fatia.

It was gathered that Spanal was killed few hours after his wife put to bed on Friday. The unidentified gunmen, according to eyewitnesses’ account, pursued him after he had sustained gunshot injuries at his first wife’s shop where he was attacked.

During Spanal’s attack, bullet was said to have hit his little daughter who was later rushed to the hospital by sympathisers. Few minutes after, Fatia was pronounced dead.

A source told The Point that, “Spanal had visited his second wife’s shop at Ilesa Garage after his second wife was delivered of a baby. While sitting at the shop with his daughter, Fatia, some guys who were carrying guns arrived the shop and started attacking him.

“They shot him at his hand but he managed to escape at the shop and was running. They started pursuing him when he was running away with blood stains. They caught him along the road and shot him dead.

“Unfortunately, bullet hit his daughter and she was rushed to the hospital before they broke the news of the death of the daughter too.”

Meanwhile, residents and passersby around Ilesa-Garage area were thrown into panic after the shooting and killing as the environment was hurriedly deserted for fear of reprisal attack. Traders and other sellers in the area were said to have shut their shops and outlets.

When contacted, the Police Public Relations Officer in the state, Yemisi Opalola said a team of policemen had been drafted to the area to restore nomalcy.

Opalola said, “Our men have been drafted to the place. We are in a management meeting on the late IGP Tafa Balogun’s burial.” 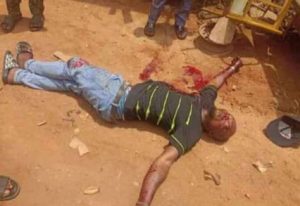