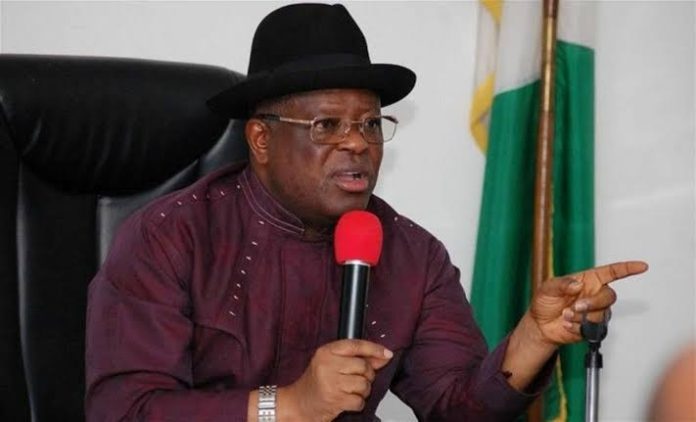 Men of the Nigeria Police Force in Ebonyi State on Saturday attempted to disrupt and disperse supporters of the OBI-dent Movement who had gathered for a solidarity march for the Presidential candidate of the Labour Party, Peter Obi in the State.

The security operatives had stormed Pastoral Center junction where the crowd had gathered and fired teargas and shot sporadically in the air.

This development caused heavy human and vehicular logjam at the capital city while people scampered for safety.

Meanwhile, that did not stop the move as the supporters regrouped and marched round the major roads of Abakaliki.

Reacting, the State Governor, David Umahi, via a press statement by his Special Assistant on Media and Strategy, Chooks Oko, debunked the attack on Obi’s supporters in the state.

The governor said: “The attention of the Executive Governor of Ebonyi State has been drawn to some online publications and rumours making the rounds that he ordered the disruption of a gathering in support of one of the presidential candidates in the 2023 elections. This is not true.

“The Executive Governor of Ebonyi State is certainly not aware of any disruption of any gathering as he didn’t order any. He is a democrat who believes firmly in the rule of law. He wishes every contending politician the very best and will insist on a level playing ground for all. If it is true that the police dispersed people, the answer will surely rest with the police.

“For record purposes, the relevant government agencies had approved the use of Abakaliki township stadium for a rally by the Labour Party subject to the payment of some specified fees. Rather than pay the fees, it was gathered, the organizers chose to empty into the streets causing some untold hardships on the hapless citizens going about their daily pursuits. The police, we are told, had to step in to restore law and order.

“The Governor appeals to all citizens to always abide by the dictates of the law and decent living so that law and order will always reign supreme. He wishes all political parties and their candidates well and enjoins all to play the game by the rules.”