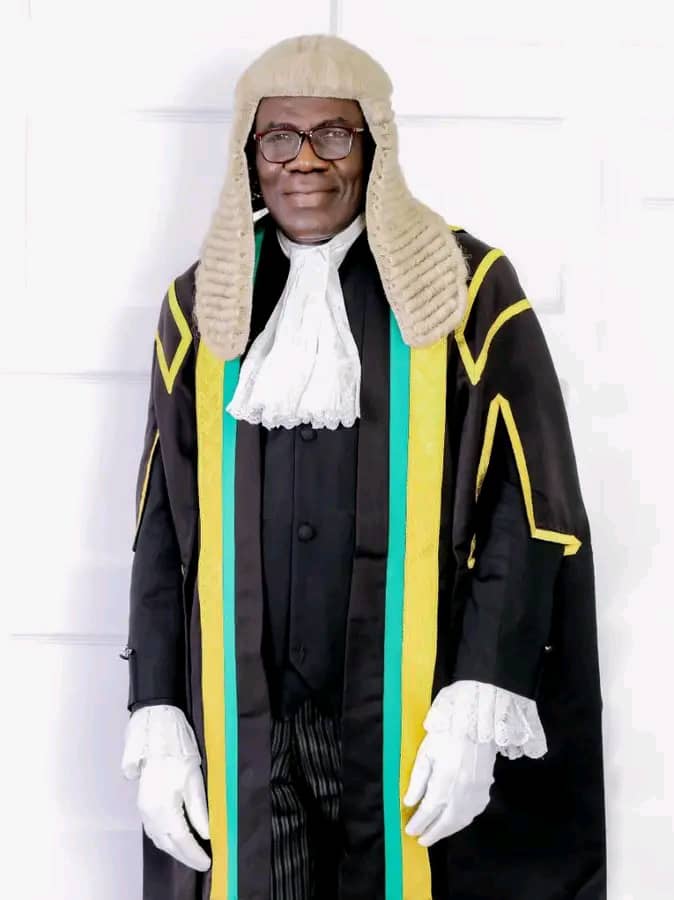 On Friday, July 29, 2022, His Lordship Hon. Justice Taiwo O. Taiwo will deliver his last judgement as a Judge of the Federal High Court of Nigeria.

For His Lordship, the day will no doubt be an emotional one for someone who has devoted the past 40 years to nothing else but the study and practice of Law.

Strangely, although it was with Law that His Lordship wrote his name into the history book, Law was actually not his first degree.

It was after obtaining his combined degree in History and Political Science from the then University of Ife that he decided to pursue his passion for law and justice by studying Law at the University of Ibadan, after a spell at Holborn Law Tutors in London. Stranger still is the fact that my Noble Lord was already married at the time he went back to school to read Law.

I have known my Noble Lord from when I was a young lawyer practicing in Lagos. I had appeared in a matter to argue an application for stay of proceeding pending appeal. Mr. Taiwo was not in the matter but was present in court for a different matter. Following my submission, the trial Judge called on the respondent’s counsel for her response. The young counsel apparently was not sufficiently briefed by her senior and was not prepared for the matter. The Judge was livid and informed the young lawyer that whether she liked it or not, she must proceed with the argument.

It was at that point that Mr. Taiwo stood up. He respectfully appealed to the Judge to stand down the matter for some minutes, a prayer which was granted by the Court. Mr. Taiwo thereafter beckoned to the young lady and went with her outside the Court. From the corner of my eyes, I saw him taking the young wig through her paces. It was a different young counsel who came back after the brief tutelage. Citing all the authorities Mr. Taiwo must have given her, she was able to prove her mettle as a budding litigator to the admiration of all.

Hon. Justice Abdullahi Mustapha who later became the Chief Judge of the Federal High Court was full of glowing words for Mr. Taiwo as an exemplary senior in the finest tradition of the Bar. That’s vintage Justice Taiwo for you, ever eager to lend a helping hand.

From that encounter, His Lordship became one of my invaluable mentors in the profession. He was always a phone call away and no matter how complicated the issues were, you could count on Justice Taiwo for a very sound legal advice.

As a Bar man, his commitment to the Nigerian Bar was never in doubt. Prior to his call to the Bar, he had creditably served as the President of the Law Students Society as an undergraduate of the University of Ibadan. It was however as a member of the Lagos Bar to which both of us belonged that his leadership skill was put to the best use. He became one of the very few people privileged to serve as Secretary, Vice-Chairman, and Chairman of a branch of the Nigerian Bar Association.

You have no doubt heard about the Magna Carta Bill of Rights. It may interest you to note that Mr. Taiwo represented the Nigerian Bar Association at the 600th anniversary of the signing of that landmark document in the United Kingdom in 2014.

When His Lordship was appointed a Judge of the Federal High Court in 2015, both the Bench and the Bar became richer for the wealth of practical legal knowledge Justice Taiwo brought to the exalted office after 27 years of active legal practice. It will amount to an understatement to state that Justice Taiwo is a Judge’s Judge. As an accomplished legal practitioner before ascending the judicial ladder, Justice Taiwo came to the office well-prepared, and it is always a joy for hard-working legal practitioners to appear in his court.

It was a pleasant surprise the day I was on the same flight from Abuja to Lagos with His Lordship. Notwithstanding the dignity of his office and the disparity in our age, Justice Taiwo, ever the gentleman, stood up to his full height to greet me warmly saying: “I had cause to use your book on taxation in the course of a judgement I wrote recently. I hope you are working on another volume.” He told me and I could feel some inches being added to my height by His Lordship’s kind words.

His Lordship is as brave and courageous as he is brilliant. I recall a conversation Abdul Mohammed SAN and myself had with His Lordship one day. Justice Taiwo told us that a judge had no business wondering what the appellate Judges or the people would say about his judgement and that the only concern should be doing justice.

In the course of his judicial career, His Lordship has had cause to deliver judgements in high-profile cases without fear or favour. It will be recalled that when the Central Bank of Nigeria froze the bank accounts of a firm that traded in cryptocurrency, His Lordship held that the CBN could not rely on a mere circular to freeze bank accounts and that the CBN failed to provide any law showing that it was illegal to deal in cryptocurrency in Nigeria.

Recently, His Lordship held that Sheriff Oborevwori, the Speaker of Delta State House of Assembly was not eligible to contest the 2023 election because he falsified information supplied to the Independent National Electoral Commission as his party’s candidate.

It is also to Justice Taiwo’s judicial credit that His Lordship was the judge who declared the activities of Yan Bindiga and Yan Ta’adda groups and other similar groups in any part of the country as acts of terrorism and illegality.

The list of cases with the imprimatur of His Lordship is of course endless. I am confident that judicial researchers and legal historians who are interested in documenting trial judgements that are capable of expanding jurisprudential frontiers will find more than ample materials in the judgements delivered by His Lordship in the past seven years.

One thing that strikes me about the tenure of Justice Taiwo on the Bench is that it is not the length of judicial service that matters but the quality of the judgements that come out of that service. I have no doubt that generations yet unborn will continue to be enriched by the judgements of His Lordship as preserved in our law reports.

Lest I forget, as Iya Agba, my grandmother, would say, eye ki fi apa kan fo (a bird is incapable of flight with only one wing). I suspect that one factor that must have contributed to the success of my Noble Lord at the Bar and on the Bench is his blessed marriage to his equally resourceful and brilliant better half, my Lord Hon. Justice Oluwatoyin Taiwo of the High Court of Lagos State. Together, the duo of Lord Justices Taiwo Obayomi Taiwo and Oluwatoyin Taiwo make the most distinguished and most excellent judicial pair. And again, as Iya Agba would say, omo ti ekun ba babi, ekun ni yoo jo (the child of a tiger must necessarily resemble a tiger). The formidable judicial pair has been blessed with children, two of whom are legal practitioners in active practice. Talk about a fruit not falling far from the tree!

I wish His Lordship Hon. Justice Taiwo Obayomi Taiwo an engaging retirement from the Bench.

Need for competent leaders in 2023 elections

The arbitrage bazaar is back again