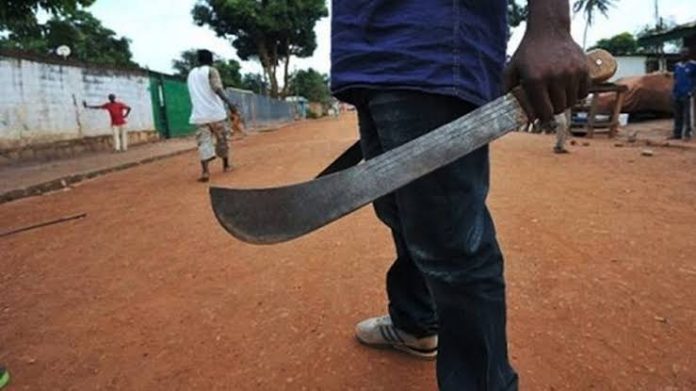 The country home of the Osun State Governor-elect, Ademola Adeleke was brought under attack on Friday as gunmen suspected to be political thugs set houses belonging to some politicians ablaze and allegedly shot dead a member of the Peoples Democratic Party in the state.

Among the houses torched by the hoodlums was the residence of the parents of the Minority Leader of the Osun State House of Assembly, Akogun Kofoworola Babajide in Ede.

Pandemonium had struck during a ward meeting of the PDP at Oloba Atapara area on Friday evening when some armed suspected political thugs attacked party members. Babajide is said to hail from the ward and his supporters were said to have gathered for the meeting which ended abruptly due to the attack.

The hoodlums were said to have started shooting before a member of the PDP simply identified as Puranga was shot dead.

Amid the attack, it was gathered that a baby was snatched from the back of a nursing mother said to be the wife of Nureni Olobe, the Personal Assistant to Babajide. As at the time of filing this report, the child was yet to be found.

The crisis threw residents living in the area into panic.

Eyewitnesses account revealed that when the hoodlums left the scene of the meeting, they set the house of Babajide’s parents and those of his other political associates’ ablaze in the town.

Babajide confirmed the attack and arson and alleged that political thugs were behind the incidents.

The lawmaker said, “The political thugs have earlier attacked some PDP members at a ward I attended in Ede on Friday,” adding that his father has not been sighted since their (parents) house was burnt down.

“Some armed thugs attacked us during a ward meeting of PDP in Ede on Friday. After that, I left for Osogbo. Later, I was told that they were attacking my parents’ house. They burnt the house and since then, I have not seen my father.

“We don’t know if he’s burnt alive inside the house or they have kidnapped him,” Babajide revealed.

Confirming the incident, the Police Public Relations Officer in the state, Yemisi Opalola said the incident happened on Friday night.

Meanwhile, the Osun State chapter of the Peoples Democratic Party has called Governor Adegboyega Oyetola and security agencies to immediately arrest the situations in Ede and other parts of the state before it escalates.

The Caretaker Chairman of the party, Adekunle Akindele in a statement on Saturday, condemned the attack on Babajide and other politicians.

He said, The PDP wishes to call on Mr Gboyega Oyetola led APC government, not to allow frustration of the defeat suffered at the recently concluded governorship election to eat deep into fabrics of governance in the state, or at least, resign immediately if the defeated governor has so much lost his bearing as chief security officer of the state.

“The PDP enjoins the good people of Osun State to remain calm and be vigilant as the party will work with relevant security agencies to bring perpetrators of the heinous crime to justice.

‘Security agencies are also enjoined to as a matter of duty and professional proactivity, set machineries in motion to arrest the rising wave of violence in the state, in which citizens are being assassinated in broad daylight with brazen audacity. This is with a view to preventing violent reprisals from victims’ relatives and attendant escalations.”

When contacted on the telephone, the Director of Publicity of APC, Kunle Oyatomi said he was not aware of the attack and that he would make inquiries.