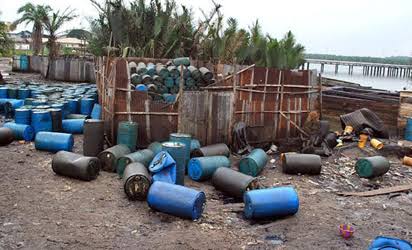 This appears to be one of the latest discoveries in the Federal Government’s fight against oil theft, illegal refineries, and pipeline vandals in the Niger Delta region of the country.

The 10 plots fenced dump site which has 170 surface industrial tanks of 1,000 liters each and 2 metal storage tanks of about 5,500 capacity is less than 2 kilometers from the Agbada flow Station operated by Heirs Oil and Gas.

Confirming the discovery, the Commandant of NSCDC, Rivers State Command, Michael Ogar, who led officers of the command and journalists to the dump site, says the premises was uncovered by the Command’s Antivandal Unit following credible intelligence.

Four persons working at the dump site including the gatekeeper and supervisor were arrested.

Ogar expressed concern over the proximity of the dump site to the Agbada Flow Station, saying a comprehensive investigation has been launched into the illegal business.

He announced the takeover of the premises by officers of the command, noting that it will remain sealed until the conclusion of investigation to unravel the owner of the dump site.

The NSCDC State Commandant also reiterated that any building or site where illegal oil bunkering activities are discovered would be sealed by the Corps and subsequently forfeited to the Federal Government.

Some of the suspects arrested at the dump site, however, denied any involvement in crude oil theft, saying they are carrying out genuine business on the site.

Recall that ex-militant leader, Government Ekpemupolo also known as Tompolo, in collaboration with other security agents days ago, announced the discovery of 58 illegal oil points on the waterways of Delta and Bayelsa states