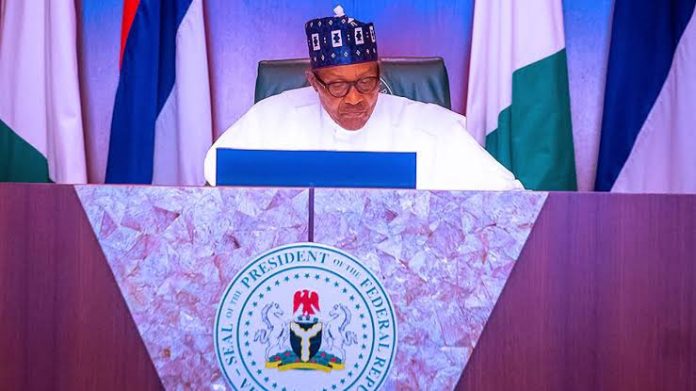 President Muhammadu Buhari says nobody can blackmail him on inexplicable wealth and illicit enrichment while in office, saying ‘‘I do not have one square-inch outside Nigeria.’’

Speaking at a State banquet, Monday night, organised in his honour in Damaturu, the Yobe State capital, the President restated his vow to serve God and Nigeria until his last day in office and beyond.

He advised Nigerians to remain patriotic, saying ‘‘as I said more than 30 years ago, we have no other country than Nigeria, we must all stay here and salvage it together.’’

Noting that the most critical security challenge inherited by the administration nearly eight years ago was the potent and pervasive threat of terrorism, the President expressed delight that normalcy has returned to affected States in North East Nigeria.

He recounted that the threat was particularly pervasive across the North East geopolitical zone with Yobe State as one of the most hit by the terrorists.

He, therefore, declared that he has fulfilled the commitment made to Nigerians in his May 29, 2015 inaugural address to frontally and courageously tackle Boko Haram terrorists and stabilize the country.

‘‘In the North East, God has helped us to clear Boko Haram, the economy has picked up and some people are asking me about the achievements of my promise to fight corruption.

‘‘Well, under this system fighting corruption is not easy. When I was in the military, as Head of State, I locked up some people because the Constitution says you must declare your assets and people who couldn’t explain the differences in their assets, I locked them up.

‘‘In the end, I was also locked up. So, if you want to serve this country you must be prepared for the worst. But one thing that I am grateful to God for is that nobody can blackmail me. I do not have one-square inch outside Nigeria and I intend to stay in Nigeria when I retire from public office.’’

Reflecting on his journey to the presidency and re-election, the President said:

‘‘Between 2003 and 2019, I visited all the local government areas in this country. In 2019 when I attempted a re-election, I visited every State and the number of people that came out to see who this Buhari is and was is more than what anybody can pay or force.

‘‘So, I thank God that Nigerians understood me and I made a promise that I will serve God and Nigerians.’’

President Buhari commended Governor Mai Mala Buni of Yobe State for taking advantage of the return of peace and security in the State to execute people-oriented projects.

Describing the governor as very competent and courageous, the President said he was lucky to have him in the saddle as the political leader in the State, supporting the federal efforts to decimate Boko Haram terrorist group.

The President also acknowledged the cooperation of Nigeria’s neighbours in the fight against insurgency, recalling that his first visit outside the country in 2015 was to Niger and Chad, to garner support on tackling the misguided sect.

President Buhari thanked the Governor and people of Yobe State, including Senate President Ahmed Lawan, for their warm reception during the State visit.

In his remarks, Governor Buni expressed delight at the President’s inauguration of landmark projects in the state, including the Yobe International Cargo Airport, Damaturu ultra-modern market, Maternal and Child Health Complex at the Yobe State University Teaching Hospital, the 2600 Housing Estate in Potiskum and the Damaturu Mega School at new Bra-Bra.

He appealed to the President to approve the takeover of the Yobe State International Cargo airport by the Federal Government and the refund of N38 billion expended by the State government on the project.

Equally, he requested the takeover of the State University Teaching Hospital, including the Maternity and Child Health Complex.

The IGP assured the President and Nigerians that the Nigeria Police are fully prepared for the upcoming 2023 General Elections and would remain apolitical in compliance with the presidential directive.

He disclosed that newly passed out Constables are being posted on field operations to their Local Government Areas in line with Mr. President’s directives and ahead of their deployment for the General Elections.

‘‘In furtherance to this, we have exposed our personnel to specialized election security management trainings, developed Code of Conduct Handbook to guide the Police and other national security agencies that will be involved in the exercise,’’ he said.

He added that the Force has also perfected the logistics and manpower mobilization framework, and fine-tuned the Election Security Operational Action Plan in conjunction with the Independent National Electoral Commission, the Military, Intelligence Community, and other Sister Security Agencies.

The IGP thanked the President for the annual recruitment of ten thousand police Constables over a five-year period, adding that the Presidential consideration has significantly bridged the manpower gap in the Force and broadly strengthened their capacity to effectively police the electoral process.