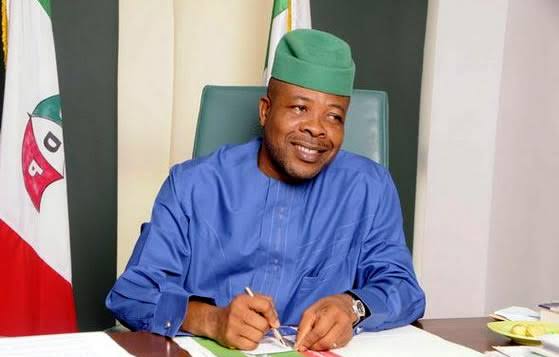 A former Deputy Speaker of the House of representatives, Emeka Ihedioha, on Friday, tendered apology to Igbo people for describing them as saboteurs over their support for the presidential bid of the candidate of Labour Party, Peter Obi.

This is coming on the heels of a video that has gone viral where the former Imo State Governor was said to have castigated supporters of Obi in South East.

But the Chieftain of the Peoples Democratic Party had in a statement issued in Owerri, the Imo State capital, by his spokesperson, Chibuike Onyeukwu, denied calling Igbo people supporting Obi saboteurs when he shared close relationship with the LP presidential candidate.

The statement accused those it described as “fifth columnists” of being responsible for the media bashing he had received following the development.

Ihedioha said his address at the new yam festival of Mbaise people living in Ghana was misconstrued, adding that he was referring to members of his political party, PDP, who were sabotaging the party in the South-East zone.

Maintaining same stance while featuring on Channels programme monitored by our correspondent on Friday, Ihedioha said his words were blown out of proportion and said he was sorry to those that might have been hurt by his choice of language.

“That I called any Igbo man or Nigerian who will vote Obi as saboteurs is far from the truth. That’s not me, it’s not in my character. I believe in decency even from my immediate family, so, that cannot be. My position was very simple. I was speaking to our people. I am an Mbaise man and the PDP has been faithful to us, PDP has been faithful to us, they have given us opportunity to produce a governor.

I said to them that we have a candidate and that they should not sabotage our efforts to reclaim power and that was it. That was the context and if you do watch the tape, you will find the context is being blown out of proportion. However, I am responsible to a people; when a people show you love, they show you confidence, they believe in you, you also have need to respect their feelings. And so, to all those, millions of Nigerians, particularly of the Southeast extraction who feel hurt by my use of language, I am deeply sorry about it.

“I do not mean to hurt anybody and they have a right, obviously, to express their political opinion in any way, form or shape. I have my friends who belong to other political parties and we still relate. So, it’s my considered view that you should accept me for whom I am and know that I am not a ride person, I am not a disrespectful person and I do not use words that are uncultured. I thank God for the privilege of my upbringing and that has guided me. I believe that should be able to assuage them,” the former governor of Imo State posited.