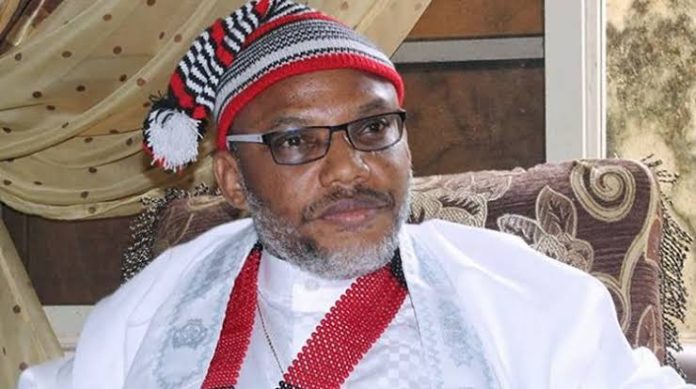 The embattled leader of the Indigenous People of Biafra, Nnamdi Kanu, has appealed to President Muhammadu Buhari to immediately order his release from the custody of the Department of State Security.

Kanu, in a petition letter addressed to Buhari, and dated October 3, 2022, said he was being kept under a cruel, inhuman and degrading conditions in the DSS custody, adding that his release would end the restlessness and sits-at-home being witnessed in the South East.

The petition letter written by Kanu’s counsel, Mike Ozekhome and entitled: “Release Nnamdi Kanu Now: The Legal and Moral Burden Of Continuously Detaining Him”, a copy of which was made available to The Point, on Tuesday, by the Senior Advocate of Nigeria, was subtitled: “Executive Summary”.

Referring to Buhari, the letter reads, “we are Solicitors to Nwannekaenyi Nnamdi Okwu Kanu, (“Nnamdi Kanu”, “our client”, “Kanu”), on whose clear instructions we write this urgent petition to your good self. The petition is to humbly urge you to order the immediate release of Nnamdi Kanu through a more productive “political solution”. You can do this by instructing the Honourable Attorney-General of the Federation to wield his powers under Section 174 of the 1999 Constitution to enter a “nolle prosequi”. This will immediately halt the present restlessness and sits-at-home mantra currently ravaging the South East and paralysing business and normal.

“We make this Executive Summary because you are about to read a very letter comprising of a admixture of law (municipal and international), ethics, morality, and your well documented premises that led to your two -term election as president of this great country. We also do this Executive Summary being acutely aware of your very busy schedule as President and Commander-in-Chief of the Armed Forces Federal Republic of Nigeria.

“This is an appeal to enable you correct a long-standing travesty: the continued detention by the Nigerian Government, of Mr. Nnamdi Kanu, the leader of the Indigenous People of Biafra (IPOB) under cruel, inhuman and degrading conditions. Mr Kanu is currently being tried at the Federal High Court for sundry offences in the course of which he was granted bail. He dutifully observed the terms and conditions of the bail until he was brutally attacked by men of the Nigerian Army on Sunday 10th and Thursday 14th September, 2017.

“As a direct consequence of that unprovoked attack, 28 innocent Nigerians were brutally mauled down. Kanu barely managed to escape out of Nigeria by the whiskers through the skin of his teeth. It was apparently a state-sponsored assassination attempt on his life. As if that was not bad enough sir, Kanu’s subsequent sojourn in exile to seek refuge in London, from where he traveled to Kenya,was brutally aborted on 26th June, 2021, when he was savagely abducted, blind-folded, tortured, kept in solitary confinement for 8 days in a secret location, and forcibly renditioned back to Nigeria.

“This was carried out arbitrarily without due process and without recourse to the judicial systems of Kenya, the UK and Nigeria. Indeed, in Kenya, Kanu had simply been tortured and made to disappear, and kept out of circulation and public view in a secret facility for eight (8) good days, by the Kenya authorities and at the behest of Nigerian authorities. It was an illegal collaboration between the Kenyan and Nigerian secret agents.

“The purpose of this humble petition is to invite your Excellency to calmly consider the following grounds on why the continued detention of Kanu violates all know laws and norms of both international and domestic laws – including Nigeria’s obligations under binding international treaties. Your Excellency, of particular concern is the July 20, 2022 Ruling of the United Nations (UN) Working group on Arbitrary Detention which was adopted on 4th April, 2022, at its 93rd session held on March 30 – April 8, 2022,” the letter party read.