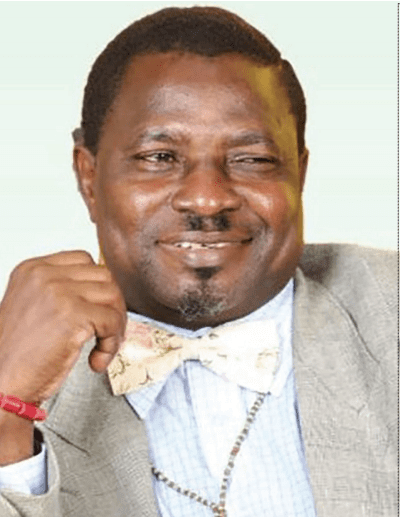 The crises rocking the Lagos State chapter of the Labour Party took a dramatic turn last week when one of the factional chairmen of the party, Kayode Salako, recognised by the Independent National Electoral Commission, resigned his position to run for an elective office, and handed over to his deputy. In this interview with MAYOWA SAMUEL, leader of the other faction of the party in the state, Ifagbemi Awamaridi, speaks about the illegalities surrounding the party as well as his expectations for the elections in February. Excerpts:

The other factional chairman of the Lagos Labour Party, Kayode Salako, recently resigned his position and handed over to his deputy. As the other fractional chairman, what’s your reaction to the development?

It’s very simple; it’s like putting something on nothing. The Labour Party constitution doesn’t allow for anything like a caretaker committee. Also whatever they said they have constituted themselves into, I’ll just refer to them as what I’ll call a support group. They are not Labour Party functionaries; they are all support groups because, in the first place, there cannot be action on illegality. In the first place, they were not supposed to be claiming to be what they are, it’s just a charade.

As of now, INEC still recognises the Salako-led faction. Why would you then regard them as a support group?

Of course, INEC has been doing a lot of malpractices and illegal activities which are known to all the security agencies. I am the national coordinator of the Labour Party Concerned Stakeholders, and we did an audit of all the things happening in the Labour Party. As at the last count, there’s been fraud in about 22 states regarding the Labour Party, in conjunction with INEC. INEC itself has compromised itself with a lot of Labour Party functionaries at the national level. For instance, Abure is not supposed to be chairman. So, from October 2022, anything done by Abure is meant to be null and void.

Does this include the Lagos State LP exco as well?

Oh, they’ve never even been legal from the onset. They are putting illegality on illegality. That’s simply the truth of the matter.

“What we’re saying in the Labour Party is that we want to end impunity in Nigeria. But you can’t end impunity with impunity. In fact, the national leadership is operating with worse impunity than the APC and PDP put together, and you say you want to change Nigeria. I’ve not been in the category of hypocrites, I’m not a hypocrite, and I’ll never be”

Just a little above a month to go, the controversial state LP chairmanship case is still at the Court of Appeal. What if this doesn’t get resolved before Election Day?

There’s nothing like justice. You can’t compare anything with justice. It’s better for justice to be delayed than no justice at all. Everybody is aware of Rotimi Amaechi’s case. During his time, they were just making noise but when Amaechi got his judgement, he just took over the mantle of power. What happened in Amaechi’s case was that they were campaigning, and they won. But the court said look, this is the candidate, and Amaechi just took over his candidature and took over as the governor of Rivers State. I will not compromise with impunity. What we’re saying in the Labour Party is that we want to end impunity in Nigeria. But you can’t end impunity with impunity. In fact, the national leadership is operating with worse impunity than the APC and PDP put together, and you say you want to change Nigeria.

I’ve not been in the category of hypocrites, I’m not a hypocrite, and I’ll never be.

Kayode Salako said he resigned because he is already a candidate contesting for an elective office, that’s the House of Representatives, so he can focus on his election campaigns. You say you double as the authentic state party chair and gubernatorial candidate. Why don’t you do the same, and focus on your campaigns which you haven’t even commenced?

INEC publishes all parties’ constitutions on their website. In fact, the LP national leadership is using two different constitutions. When they conducted that substitution primary in Lagos for Salvador and Chinedu, who calls himself Gbadebo, they used the 2009 constitution, an obsolete constitution, which they submitted to INEC as the authentic constitution. These things were displayed in court, it was when we went to court that we discovered a lot of things. Do you put something on illegality? There can’t be a 2019 constitution because Justice Kolawole of the Federal High Court in 2018, ruled on the case between NLC and the Labour Party that LP can’t hold a convention in 2018, without an all-inclusive coverage. Have they held that convention since then? No. So, how do you now change the constitution of the party?

How did you amend the constitution illegally? That’s why INEC did not recognise any constitution apart from the 2014 constitution. It’s in that 2019 constitution that they fraudulently removed that part that says you should finish the term of the deceased or the person that resigned. As of today, Abure is not the chairman of the Labour Party legally. Do you now think this sort of character can drive a fundamental and genuine change in the system? Rather, they’re going to mess the system up and make it worse. That’s why we’re saying there must first be a fundamental change within the party before you can make a change in the country.

With the introduction of technology for the 2023 election (BVAS, IREV), are you convinced that INEC will be able to prosecute a free and fair election?

Nigeria is Nigeria. You can only know if that will happen when the election comes. That’s the miracle of Nigeria. There are a lot of forces involved in this game, so a lot of things are happening. Let’s wait and see. It’s either INEC performing appropriately or the masses spontaneously performing appropriately. We’re already getting to the point of the possibility of revolution.

The election is next month. Since that substitution exercise, has the gubernatorial candidate, Gbadebo Rhodes-Vivour, tried to reach out to you?

If an armed robber robs you of your property and you are trying to recover your property. In the course of getting your property back, someone calls you to come and sit with the armed robber to discuss how you will forget the property with that robber, what is that person doing? The person is telling you to give the receipt of the stolen property to the robber. That’s the simple meaning.

But has this taken place at all? Has he (Vivour) tried to reach you at all?

I’m not a bastard, neither am I a madman or an infidel. Nobody can come and even try to tell me to come and sit with the robber of my property, nobody will even try that nonsense with me. After the so-called high court fraudulent judgement, the same day the thing happened, this character, this Chinedu who you call Vivour, tried to bribe one of the junior lawyers handling my case. After they failed, they still went to the pastor of one of my lawyers too. The pastor now called the person and said he wants him to do him a favour. This analogy I’m giving you is what that person told that pastor, and the pastor apologized and walked away. So, if somebody is sure of himself, will he be running from pillar to post to bribe a lawyer?

“If the game is well handled between now and the date of the election, we might not need a run-off. In 24 hours, there could be a lot of horse trading at the last minute. For instance, don’t expect that all those that came to infiltrate the Labour Party in Lagos will follow you to the polls on Election Day. Some of them, at the last minute or a week or so, will go back to their paymasters or work for their paymasters”

All these are part of the political games, and you cannot blame anybody for that. That’s normal in Nigerian politics. Definitely, the candidature of Peter Obi has become a premium. So, you can’t erase that, Peter Obi’s candidature as a presidential candidate is a premium. If you look at it now, Peter Obi is still one of the three leading candidates, which was not so as in May last year. You can’t say anything that will happen until Election Day because even 24 hours in politics is like a year; anything can happen within 24 hours. By the time we start our own campaigns and come into the game fully, the whole dynamics will change, I can assure you. So, if that happens, you can definitely know that we’re talking about seven million votes, and that’s a lot of difference to the national figure when it comes to results. If people like us get involved fully, definitely we are not going to be operating like all these feeding bottle candidates of the Labour Party and so on and all these amateur systems of candidature.

Nigerian politics is not a baby game, not for people who just believe in advertorial, Nigerian politics is practical. The politics of Nigeria is won on the streets, telling stories can’t make you win elections, you have to be down to earth. I’ve heard many say there might not be a clear-cut winner at the first instance, but there will eventually be a winner but the question is who is going to be the first two? It all depends. If the game is well handled between now and the date of the election, we might not need a run-off. In 24 hours, there could be a lot of horse trading at the last minute. For instance, don’t expect that all those that came to infiltrate the Labour Party in Lagos will follow you to the polls on Election Day. Some of them at the last minute or a week or so, will go back to their paymasters or work for their paymaster. But if you have somebody who understands the game, he’ll checkmate whatever they want to do. But right now as it’s constituted, the Labour Party is already being held by the jugular by opposition parties. The Labour Party is not in control right now in Lagos, that’s just the truth. It’s being controlled by different people everywhere who are all claiming to be Labour Party just to come and plunder it in favour of opposing parties. As of November, Olusegun Obasanjo had not endorsed Obi, so a lot of dynamics will continue to change until Election Day.

I’m keeping my eyes on the ball – Babajide Sanwo-Olu