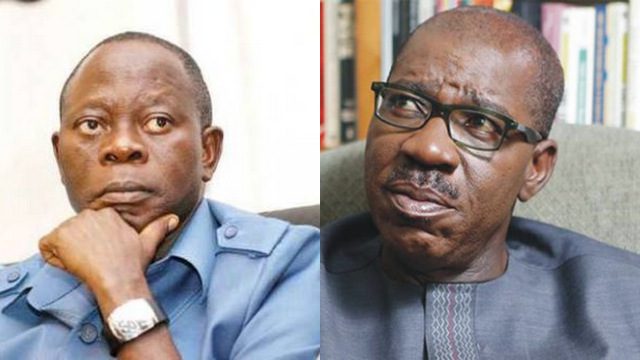 In the forthcoming round of general elections, Edo State would have nothing to do with the gubernatorial contest as it is one of the off-season elections in the country. However, two political giants in the state, Governor Godwin Obaseki and former Governor Adams Oshiomhole, will be going head to head once again in a test of popularity, acceptance and political influence.

Last time, Obaseki was on the ballot. He did the double over Oshiomhole. First, he was able to wriggle out of the web of intrigues spawned for him by his predecessor in office and who was also the national chairman of the All Progressives Congress. The process made it difficult for him to pick the ticket, so he dumped the party. Second, upon his emergence as the flag bearer of the People’s Democratic Party in the state, he defeated Oshiomhole’s well-packaged and heavily supported candidate, Osagie Ize Iyamu, at the poll to grab a second term in office.

This time, the table has turned slightly. Oshiomhole is the senatorial candidate of the APC for Edo North. And he can claim to be one of the leaders of the party in the state. So, he will not be fighting to secure victory for himself alone, he carries on his shoulders the burden of making his political ally, who is the presidential candidate of the APC, Bola Tinubu, to win and so defeat the candidate of the PDP, Atiku Abubakar, who is being projected by Obaseki. He is not one of the G5 governors known lately as the Integrity Group.

In the absence of the governorship election, therefore, Edo State voters will be made to focus on the presidential election, senatorial election and the House of Assembly elections.

Across the state, from North to the Central and then Southern senatorial districts, investigations by The Point revealed that intense campaigns are on as the two leading parties know the magnitude of the challenge at hand and are said to be pushing relentlessly to ensure that their candidates emerge as the winners of the elections slated for February 25 and March 11, 2023.

There are doubts if the odds, according to findings, favour the APC in the state, rather, they are said to be evenly matched. The reason, it was gathered, is due to the fractured nature of the PDP which is yet to close ranks but still reeling under the yoke of acrimony and division with cases still in court yet undecided.

There are two factions laying claim to the leadership of the party in the state. The one by the Governor and the other by Dan Orbih, former state chairman and currently national vice chairman, South-South. And until a last pronouncement is made by the court, it has been difficult to ascertain exactly who will represent the party at the election.

There is therefore what is said to be self-imposed inertia on the part of the candidates that are jostling to represent the party.

From further findings, the Labour Party and the APC may jolly well emerge as beneficiaries of the PDP’s intractable family fight. For now, however, it is the candidates loyal to Obaseki that are listed on the INEC website, but candidates in Dan Orbih’s camp are waiting to take over in the event of a favourable court decision.

But the inter-party battle to be led by Obaseki and Oshiomhole is expected to be most intense in Edo North.

“There are still a few distracting activities within the PDP, but that has not made the APC stronger. So, Oshiomhole will have problems because he is contesting an election, if he is not focused on his own election and he wants to be able to provide solutions across the state; that will be a major distraction for him. The worst thing that can happen to anybody is overconfidence”

Here, Oshiomhole will be staking everything he has as a two-term governor on the platform of the APC, an ex-national chairman of the party and indeed a renowned former labour union activist and leader against Senator Francis Alimikhena, who is in Governor Obaseki’s PDP camp. For the record, they were both in the APC. In 2014, Oshiomhole backed Alimikhena in the APC primaries to beat Senator Domingo Obende. But the table has turned today.

After Oshiomhole had declared his intention to vie for the senatorial tickets in Edo North, which automatically became a threat to the ambition of Alimikhena, he joined Governor Obaseki in the PDP after accusing APC party leaders in Edo North of working against him. At the APC primaries, Alimikhena was credited with four votes. But he denied ever taking part in the primary election.

Oshiomhole has been tipped as having an advantage over the PDP candidate in the upcoming election because he led his people to victory in five of Edo North’s six local governments when Obaseki was elected governor in 2020. The former APC national chairman is a household name, and it will take a big upset in Edo North politics to beat him in the election.

But the PDP and the Obaseki camp are banking on the extent to which the current Deputy Governor, Phillip Shuaibu, would go in swinging the election in favour of his party. Described as a Young Turk, the energetic youthful deputy governor has a huge followership that are said to be loyal to him.

But Oshiomhole is said to have a lot to brag about as he was said to have done so much developmental work in Edo North when he was governor. To be sure, with the backing of Obaseki and Shuaibu, the incumbent Senator will not go down without a fight, and his men are also drumming up support for him to ensure he returns to the Red Chamber. Alimikhena, with assistance from the governor and as a serving senator will fancy his chances of returning to the Senate but he knows he will come up against a well-known political heavyweight in the person of Oshiomhole in next month’s electoral contest.

Meanwhile, Pascal Ugbome, who belongs to the Dan Orbih faction of the PDP is waiting in the wings. And of course, the Labour Party’s flag bearer in the zone, Anslem Eragbe, described as the dark horse in the looming electoral warfare, definitely will be a baptism of fire for him.

And in Edo South, the governor’s senatorial district, Matthew Iduoriyekenmwen of the PDP, who is in the governor’s camp and the party’s candidate for now, is said to be doing well.

Findings showed that he is always meeting people in his constituency, both at his residence and on the campaign trail. He visits wards and local governments to see the voters. And it would seem he is not bothered by impending court cases. He simply went about marketing himself to the people. He has been a PDP member since its inception and was a majority leader in the Edo State House of Assembly. He was also an NDDC commissioner, representing Edo State. He defeated incumbent Matthew Urhoghide in a close contest in the primary election, while the other primary, done by Orbih’s faction, threw up Omoregie Ogbeide-Ihama, who close associates say is waiting for the final court judgement before embarking on campaigning.

On the side of APC and Oshiomhole, Oil and Gas businessman, Valentine Asuen, holds the APC ticket. He defeated a former deputy governor of the state, Lucky Imasuen, in the primaries. He is regarded as a neophyte on the political turf and he has conducted his campaign in a manner that leaves associates and opponents alike wondering what he has up his sleeve. However, Asuen has been able to endear himself to people at the grassroots. He also has the strong backing of the youth leader of the party, Tony Adun, who is a strong mobiliser.

In Edo Central, the incumbent senator is of the PDP. He is Clifford Ordia, who is in the Obaseki camp. He is currently seeking another term to represent the zone in the Red Chamber. He was a proven businessman in Port Harcourt in 2014 when he came to seek an elective post in Edo. He won, served his term, and his people gave him another four years in 2019. He is seeking another term in the Senate, but that ambition may be halted by the internal wrangling in the party, as Mike Onolememen, who won the primaries in the other faction, is also waiting to take over in case the court gives his camp the nod to do so.

APC candidate, Monday Okpebholo, is new to the political turf but he has always helped his constituency while he was in the private sector. He is not fidgeting over the fact that he is new, as he hopes to beat seasoned campaigners in the election. He has been described as Edo Central’s “Mr. Infrastructure,” and he hopes to carry out projects that will have an impact on the lives of the people if he gets elected. He is passionate about providing clean water and road infrastructure to the people. He says these are some of the things that propelled him into running for the Senate under the platform of the APC. He also expressed dismay that those who have represented Esanland in the recent past, both in elective and appointive positions have failed the people.

Speaking to The Point, lawyer, community leader and former APC chairman during Obaseki’s first tenure, Anslem Ojezua, said there won’t be any meaningful difference between the coming election and what happened recently in the state, referring to the gubernatorial election of 2020.

“I don’t think there will be much difference from the previous election from the way I see it. There are still a few distracting activities within the PDP, but that has not made the APC stronger. So, Oshiomhole will have problems because he is contesting an election, if he is not focused on his own election and he wants to be able to provide solutions across the state; that will be a major distraction for him. The worst thing that can happen to anybody is overconfidence.

“If a person feels so much about himself, attaches so much value to himself, in politics that could be a very dangerous feeling to have. Politics is not a place where you take things for granted. But by and large, I don’t see any major difference from the previous election,” he said.

On the internal crisis rocking the PDP in the state, Ojezua said whoever carries the day in the court will still be a PDP candidate because there is no provision for independent candidacy. He wrote off Dan Orbih, saying historically, there is no political value that can be attached to Dan Orbih.

“Yes, there is a case in court, but it is internal within the PDP. And it is the PDP that is on the ballot, not individuals. Technically, the way to look at it is provided everybody works for the success of the PDP, whoever wins in court takes the benefits. The result will be acceptable to everybody.”