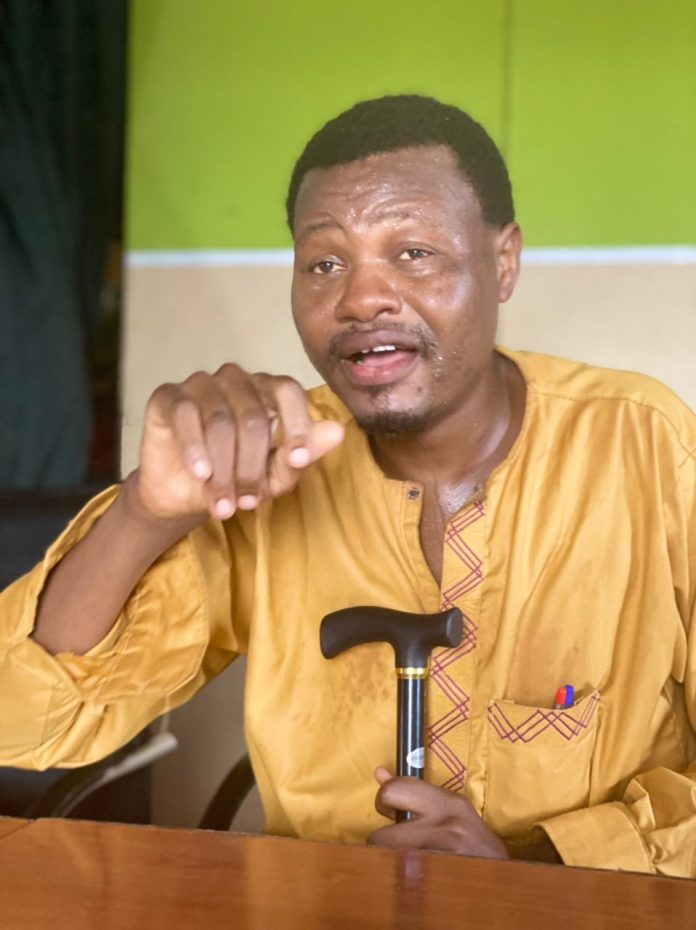 Says he slept with over 400 ladies, lived wayward life

A member of the Redeemed Christian Church of God in Osogbo, Osun State, who simply identified himself as Gbenga Apantaku, has revealed how a spirit took possession of his body at the Redemption Camp in Lagos and asked him to show himself to the General Overseer of the Church, Pastor Enoch Adeboye as the respected cleric’s successor.

Looking very disturbed while speaking with The Point, Apantaku, who said he is married with a kid, disclosed that the spirit had been ordering him to go and meet Adeboye.

He said all his efforts at meeting Daddy GO, as he is fondly called, have been unsuccessful as his visitations to the office and home of the popular preacher had been unfruitful.
He said the unknown spirit had taken possession of him and also tormenting him since 2011.

Apantaku explained how his medical doctors and lawyer advised him to visit media house in order for Pastor Adeboye to understand his predicament.

According to him, whenever the said spirit got inside him, he behaved strangely and in a lunatic manner adding that the spirit kept on telling him, “Take me to Pastor Adeboye. Pastor Adeboye is waiting for me.”

“I have been on this since 2011 when I was in Lagos and it has taken me from one hospital to the other because whenever the spirit possesses me, they think I am mad and they take me to different teaching and psychiatric hospitals. I was at Osun State University Teaching Hospital and I met with the Chief Medical Director to sign a letter in support of the fact that I am fine and that a spirit possessed me and he said medically, they don’t believe in spirits. I also met my legal counsel, he also said, legally, they don’t believe in spirits. They now advised me to visit the media,” he said.

On how the situation started, Apantaku said, “actually, when I was doing my Masters at Ladoke Akintola University of Technology, Ogbomosho, 2008/2009, I had the opportunity of lecturing then at the departmental level on physics 101, 102, 103, 104 and 203. I was also teaching Mathematics and Further Maths at Federal Government College. But when Akala (late Alao-Akala), the then Governor of Oyo State wanted to take LAUTECH to Ogbomosho, so, they dropped all of us from Osun State. I had no choice than to go and take a job in Lagos State at Gbagada.

“So, there was a time I was driving to Lagos in 2011 and my car broke down at the toll gate at Ogere, and there were only trailer mechanics around there and I had to take a bike to Shagamu to get a mechanic to fix my car. I spent all my money and I couldn’t afford a hotel and I must get to work. So, I had to sleep at the Redemption Camp where a spirit possessed me. Ever since that time, the spirit has never allowed me to rest. It has been telling me, “take me to Pastor Adeboye, take me to Pastor Adeboye. Pastor Adeboye is waiting.

“While sleeping at the Camp, I had a dream and I saw something in white, it entered inside of me. I have a made a lot of consultation that this is what I have been seeing. Around that time, Pastor Adeboye announced in 2010 in April, that the person that will take over from him has never stepped into Redemption Camp. That was 2010. Two weeks after, a friend, Adedigba, called me in January 2011 that Pastor Adeboye announced that the person has stepped Redemption Camp but he has not seen the person.

“From the prophesies of 1990 and early 2000, Pastor E. A. Adeboye announced that the person that will take over from him has not even seen him, that the person was at the beer parlour and that the person was still busy sleeping with prostitutes and harlots, smoking cigarettes, and drinking alcohol which I so much fulfilled the prophesies because I spent all my earnings when I was working in Abuja. My second house happened to be a hotel. I have slept with over 400 ladies even though I am with my wife and child, my son, Samuel.

“Now, I have been drinking and smoking but that aside because many people do that, but the thing now is that the spirit has never left me ever since 2011. The spirit will just say, take me to Pastor E. A. Adeboye. Pastor E. A. Adeboye is waiting. Hell is real, heaven is real. So, sometimes, I will wake up in the middle of the night with just ordinary boxer and I will be shouting, so, people around me will then think this is madness. Whenever this happens, four or five people will just come around me, hold me and take me to the psychiatric hospital.

“I have met with the leadership of the Redeemed Christian Church of God to meet the GO. I have gone to Ebute Meta times without number, that’s the headquarters of the Redeemed Christian Church of God, I have gone to Victoria Island, the Prayer land City of David, I have gone to the Redemption Camp to meet with elders but Pastor Kushi, the state pastor of Lagos State then, said the only way to see Pastor Adeboye is by writing letters and I have been writing letters ever since 2017 and I have been receiving response and that has been that they will invite me soonest to meet with Pastor Adeboye.

“I have a lot of revelations. I saw Pastor Adeboye in glory wearing a crown but his crown is not up to mine because I am greater than him. Adeboye’s glory is not up to my glory. Adeboye is like John the Baptist who is to prepare the ground. The spirit told me I am the successor of Adeboye and I have been trying to meet him just for confirmation but it hasn’t been successful,” he explained.