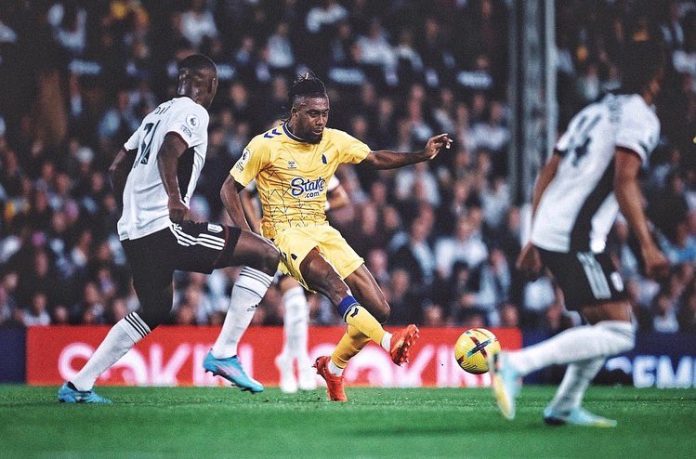 Super Eagles star performer Alex Iwobi gave a five-star display at the Craven Cottage at the weekend as Fulham held Everton to a scoreless draw.

The 26-year-old participated in the hotly contested match for 90 minutes.

Iwobi has participated fully in each of Everton’s 13 Premier League games thus far with the Nigerian international having five assists and one goal this season for the Toffees.

Everton will host Leicester City in their next league game.

After his outstanding performance in the Premier League cracker at Goodison Park against Crystal Palace, Iwobi was named the Man of the Match for Everton.

After assisting in two of his team’s goals, Iwobi was announced as the Toffees’ Most Valuable Player on their Twitter account.

Iwobi provided the assist for the opening goal scored by Dominic Calvert-Lewin in the first half.Then his clever back heel found Dwight McNeil who made it 3-0.

Iwobi has now provided five assists in the Premier League and six in all competitions for Everton this season.

Everton’s losing streak of three games in a row was broken by the victory over Palace under Patrick Vieira.

Additionally, the win elevated them to 11th place in the league standings with 13 points.