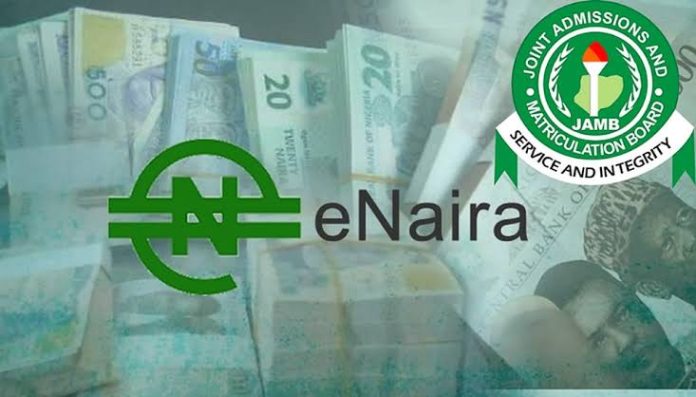 With a view to blocking leakages in its transactions and ensuring elimination of extortion of candidates, the Joint Admissions and Matriculation Board has made eNaira as mode of payment for those who want to register for Unified Tertiary Matriculation Examination this year.

The board is partnering with the Central Bank of Nigeria to adopt e-naira as the preferred payment mode chosen for the 2023 UTME registration.

Aside that the new payment pattern would checkmate financial leakages within JAMB system, the apex bank in Nigeria revealed that eNaira would prevent candidates from being extorted by registration centres.

Disclosing the development during a meeting with JAMB and its financial partners, the Director of Information, Technology, Architecture, and Strategy at CBN, Rakiya Mohammed, said the newly introduced payment mode would also reduce cost of cash transactions.

Mohammed, who was represented by an official of the bank, Abdul Shedrack, while maintaining that the new payment mode would block leakages in JAMB’s transactions, also stated that e-Naira was needed to reduce the overall indirect cost of cash transactions on the broader community.

Aside that the mode would accelerate the digitization of cash and facilitate the development of e-commerce as well as support, the CBN Director added that it would enhance the implementation of government policies.

On the seamless implementation and usage of e-naira seamless, Muhammed explained that the e-naira is the digital version of the naira currency as it has the same value and is backed by law.

Following this revelation, the director said that the mode would function as a safe and efficient alternative means of payment which is seamless and fortified against any form of abuse.

The CBN, therefore, urged JAMB applicants to download and install the eWallet from its website or via Google Play Store or Apple’s IOS Store.

It could be recalled that in 2021, Nigeria became the first African country to introduce a central bank digital currency by launching the eNaira.

However, over a year after, the adoption of digital currency is still very slow, even though the Central Bank of Nigeria believes it has recorded significant success with the currency.

The CBN Governor, Godwin Emefiele, had disclosed that eNaira has recorded 700,000 transactions valued at N8 billion since its inauguration on October 25, 2021.