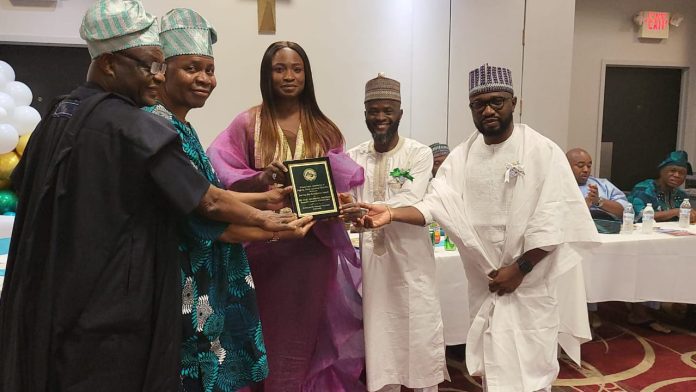 Governor AbdulRahman AbdulRazaq has achieved commendable feats in the areas of basic amenities and repositioning the state for a better future, the most influential body of Kwarans in diaspora KSANG said at the weekend.

The body said personal observations from members who have recently travelled home and reports of various projects and programmes from relatives back home show that AbdulRazaq is propelled largely by a passion to leave the state far better than he met it, especially in rural development initiatives, provision of basic amenities, and workers’ welfare.

The comments followed an evidence-based presentation by the government’s delegation to the KSANG Convention in New Jersey, United States.

At the award dinner held on Saturday night in honour of the Governor, Jamiu Mosobalaje Oyawoye, founder of Al-Hikmah University, AbdulRaheem Oladimeji, and thespian Adebayo Salami, KSANG (North America) said AbdulRazaq’s “first three years have significantly transformed the socioeconomic and political landscape of Kwara” while his “interventions in various sectors have brought ease to the masses and redirected governance in the state.”

KSANG commended the governor for his open door policy and excellent relationship with Diapora Kwara, including his appointment of a focal person, his gender inclusion policies and commitments to improve learning outcomes for the Kwara child and improved healthcare delivery.

Earlier at the ‘Forum With Governor’, senior citizens in Diaspora took turns to commend the Governor for his people-focused governance which has benefited every part of the state.

Kwara has become a better place and things can only improve in the coming years, they said.

Suleiman acknowledged the improvements in the health sector over the last three years, saying the situation in 2019 was “below ground zero”.

Top entrepreneur, Lanre Shittu, who spoke on challenges and opportunities available in Kwara, said the administration has been very friendly to businesses and other private initiatives, adding however that a lot still needs to be done to drive industrialization.

He also commended the administration for its investments in basic education and for its efforts on security which make Kwara a safer place than many states in the country.

The event was attended by diplomats, several Kwarans and Nigerians in the United States, including US Rep of Kwara origin Adeoye Owolewa.