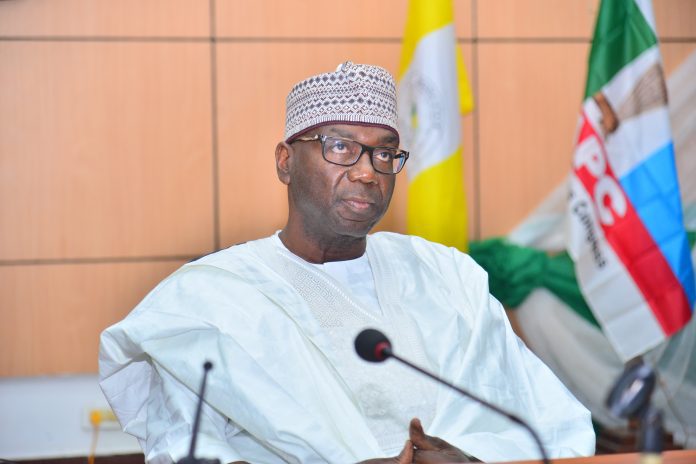 Kwara State Governor AbdulRahman AbdulRazaq has held a virtual town hall meeting with Igbomina think tank to lay bare his administration’s proposals for an industrial hub located on the Amoyo-Jimba Oja-Idofian corridor, master plan, and sustainable action on the IV-TEC.

The talk was preceded by a verifiable catalogue of the administration’s multi-sectorial achievements in the region and across the state, including road projects, bridges and culverts, water, education, health facilities, social investment, workers’ welfare, and appointments into key positions in government.

In an interaction that lasted about four hours on Wednesday, the Governor sought their buy-ins for an industrial hub to be sited at Amoyo-Idofian axis because of its proximity to electricity source from Osogbo.

He said the hub — comprising agroprocessing and service centres — would be included in the 2023 budget but will take a few years to be completed because of its large scope.

AbdulRazaq said the proposal to site an industrial park in Jimba Oja axis was mainly an economic decision to make sure those companies that are located there would have access to energy directly from the national grid — a position many participants agreed with.

He said the park offers investment opportunities for the people of the state, especially Igbomina people, adding that such facilities will hasten development in the axis.

He attributed the collapse of many industries in the state to high cost of or the lack of sustainable energy sources.

“If you look at the industries in Offa, the Okin biscuit, the Erinle paper converter, they have all collapsed and it is majorly because of the cost of energy or the lack of it. It is a major reason they all went down, basically because of the cost of diesel. Diesel, today, is over N800 per litre — industries can’t sustain this. Essentially, the most important source of energy with the 33KV passing through Ganmo going to Jebba and Kanji, going down to Osogbo, that is the best location, so it is not a political decision to locate it there, it is mainly an economic decision to make sure those companies that are located there have access to energy directly from the national grid.

“Without shaving your head behind your back, one needs to engage and see what superior arguments are out there in terms of location. What are the issues that affect the sensibilities of the communities there? So, that is why I said this is what we want to do, but if there are better ideas let’s discuss because it is something we want to put in the 2023 budget, so that we can start the processes. These industrial parks cost a lot of money,” he explained.

He said the park will be a state-led initiative to drive growth, adding: “Already, there is an agroprocessing zone being funded through the African Development Bank. It is one of the six nationwide, and Kwara has got one to be situated in Kwara North. This is being located in Kwara North mainly because of its comparative advantage.”

Asserting that the state can no longer afford unplanned growth that had led to flooding and poor access to basic amenities, the Governor also explained that the Ilorin Master Plan, the first phase of a comprehensive Kwara Master Plan, will be followed by other master plans for the other parts of the state.

He said Amoyo was removed from the Ilorin Master Plan following his consultations with the Igbomina leaders, adding however that the original inclusion of Amoyo within the 25 kilometres radius of Ilorin City was to maximise public resources, and not on account of any political motives.

He said the first and the last master plan for Ilorin capital city expired over two decades ago, leading to unplanned growth and its consequences on sustainable human living and infrastructural development.

The government is similarly concerned about the sustainability of the International Vocational Technical and Entrepreneurship College (IVTEC) Ajase-Ipo and it may require some upgrades to issue diplomas or degrees for wider acceptance, the Governor told the think tank, adding that such upgrades will not necessarily affect its primary focus on vocational trainings.

“We acknowledge the concerns on IVTEC. At the same time, we need to think about sustainability. Is it sustainable as it is? When we came on board, it was practically down. No one was enrolling there because they complained that the certificate is not widely recognised. We reduced the tuition to make it affordable while bearing the other costs but the situation remains the same. As I speak to you, only students that are 100% funded by the government are enrolled at the school. This is not sustainable, hence the plan to probably make it a campus of KWASU, while its vocational and other technical training programmes are still being offered but with more acceptable certificates,” he said.

The Olupo of Ajase-Ipo Oba Ismail Alebiosu, who confirmed the development as narrated by the Governor with firsthand information within his domain, said the government and the people will be better served if the IVTEC issues a more acceptable certificate, even if it retains technical training. He said the current trend in the school is not sustainable.

President of Omo Ibile Igbomina Elder Jimoh, for his part, commended AbdulRazaq for his plans to open up Kwara South for economic activities and development.

“On behalf of the Igbomina people both at home and abroad, I want to thank His Excellency for all that you have listed. Most especially, I am thanking him for granting our request for the exclusion of Igbomina land from the 25 kilometres radius new Ilorin City plan. We are very grateful for the prompt response to our request,” Elder Jimoh said.

Nurudeen Adeyemi commended the AbdulRazaq’s administration for ensuring even development of the state and for prioritising people’s agenda.

“Thank you, Your Excellency, for always prioritising what we call the people’s agenda. At no time have we spoken to you about the concerns of our people that you have not risen to the occasion.

“Most importantly, you understand the imbalances that our people have felt in the past and I know that Your Excellency continuously and cautiously try to take a balance approach to make sure that development and all other intangibles, whether it is in hiring of teachers, is on level playing ground and equally balance across the three senatorial districts. That is leadership. Therefore, we are very fortunate to have you amongst us today here and most importantly to thank you for the excellent leadership you have provided our great state at this very difficult times,” he said.

Raphael Olanrewaju, another member of the think tank, said eyewitness accounts of the government’s strides have been commendable, urging him to also help with the Arandun road in Irepodun local government.

Participants took turns to commend the Governor for his clear-headed ideas about socioeconomic development, his modest approach to public life, and for helping to drive a new political narrative that de-emphasises extreme conducts or political violence in the state.