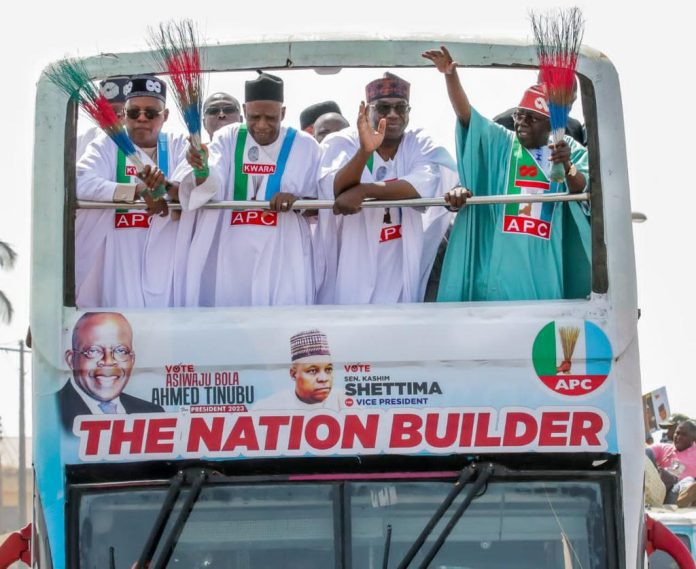 Kwarans have heaved a sigh of relief since shaking off the yoke of political servitude in 2019, with great improvements in delivery of basic amenities and other goodies, APC leaders said on Tuesday.

“Kwara people, I congratulate you for your freedom four years ago. It was a thunderbolt across the country. You deserve great congratulations,” APC presidential candidate Bola Ahmed Tinubu told thousands of party supporters and chieftains who attended the rally in Ilorin, the state capital.

“Today, we are just celebrating freedom. We are re-assessing and re-asserting our freedom in democracy. Yesterday, they never believed that today would happen, but it is happening in your lifetime. We thank you for believing in (Governor) AbdulRahman AbdulRazaq. He knows how to behave. He is a very honest and genuine, hardworking man.

Accompanied by First Lady Ambassador Olufolake AbdulRazaq, Kwara State Governor AbdulRahman AbdulRazaq commended the people of the state for coming out in droves to welcome Tinubu and his entourage.

“This huge crowd is a testament to our standing with the people of Kwara State. It shows that we have won this election. Our presidential candidate has seen what we have done in this state. Kwara is APC. Kwara indeed is one of the strongholds of the APC. Our members are happy. The state is happy. They have seen what we have done. We met a failed state in several sectors, and we have been able to tackle it from education, healthcare, and other sectors. All the indices have gone up in the right sense,” he said.

“You need to continue to support this party at all levels. President Muhammadu Buhari has done well. We need to build on his success. No person could have done what he has done, despite the economic downturn, Covid-19 pandemic, and global economic crisis. We must sustain this growth consistently. That will be continued by our incoming team led by Asiwaju Bola Ahmed Tinubu.

“Party faithful, I urge you to support and vote for Asiwaju Bola Ahmed Tinubu. The progress we have in this state will be continued with Asiwaju Bola Ahmed Tinubu. We thank him for the support he gave us in 2019. He gave us full support in throwing out the termites in this state. We still want to thank Mr. President, who is away in Mauritania. He couldn’t be here but he will come back here. We appreciate his efforts and the support he has been giving this government for the progress of the state. You all know what we have been doing in this state from healthcare. Don’t allow the party of people of dubious characters to come back into this state. Don’t allow people who stole the UBEC funds to come back to this state. They could not even pay salaries. What are they coming to do?

“Just last month, we paid N3.5bn for pensions and gratuities of 2009 and 2010. When we came in, there was no water works working in this state. We have 90 waterworks in this state right from the time of Sir Ahmadu Bello. They crashed everything. In fact, they were not paying counterpart funds in the health sector. Nothing.”

APC National Chairman Abdullahi Adamu said Kwara has proven to be a strong APC state with the showings posted for the rally.

“Kwarans, you have really surprised me. I have seen more than what I expected, and everyone has seen what Kwara has done today. You have said it loud and clear that you are better together. We pray and hope that this is translated to real vote on the 25th of February,” he said.

The campaign train later paid a special homage to the Emir of Ilorin, Ibrahim Sulu-Gambari, who prayed for the success of the candidate in the coming polls. He acknowledged the sterling qualities of Tinubu and Governor AbdulRazaq, who he described as great and humble achievers.