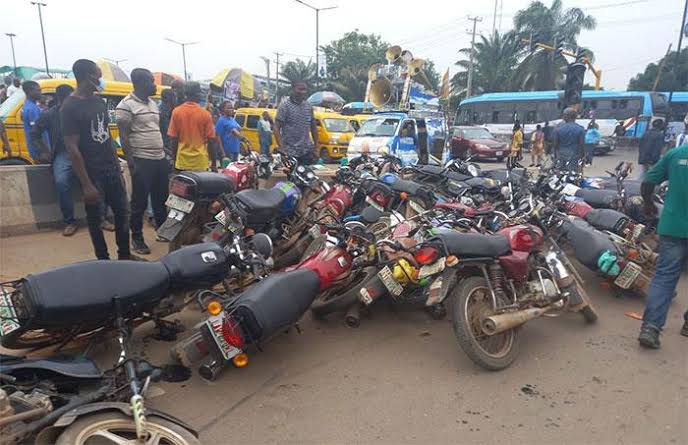 The Lagos State Environmental Enforcement and Special Offences Unit has impounded 150 motorcycles for violating traffic rules in the last one week.

The unit’s spokesman, Gbadeyan Abdulraheem, stated on Sunday that 10 persons, including motorcyclists and passengers were also arrested and prosecuted for plying the BRT corridor.

He stated that the motorcycles were impounded after a weeklong operation at Ogba, Apapa, “Trade Fair’’, Elemoro, Ojodu and environs.

Lagos State government banned the operation of commercial motorcyclists on some parts of the state earlier in the year
Abdulraheem stated that there had been about 95 per cent compliance with the ban, but that the 150 motorcycles impounded were used to flout the order.

“It has come to our notice that commercial motorcyclists have aggressively been returning to the restricted routes.

“Any commercial motorcyclist caught will have his motorcycle crushed. Passengers and riders who are caught will be charged in court.

“Ten commercial motorcyclists and passengers were arrested for riding on the restricted BRT corridor.

“They were in court and were fined N50,000 each or serve three months at the Badagry Correctional Centre,’’ he stated.

Abdulraheem reiterated that the unit would continue to enforce the ban to achieve orderliness on Lagos roads.

“No amount of aggression or resistance by commercial motorcyclists can match our determination to create an enabling environment for every law-abiding `Lagosian’,’’ he added.

Abdulraheem noted that the unit impounded at least 20,000 commercial motorcycles between January and September.

He said the unit had also made considerable progress in dislodging land grabbers.

He vowed that the unit would go after any unscrupulous element still involved in the practice and urged Lagos residents to report criminal activities to the police or to the unit.