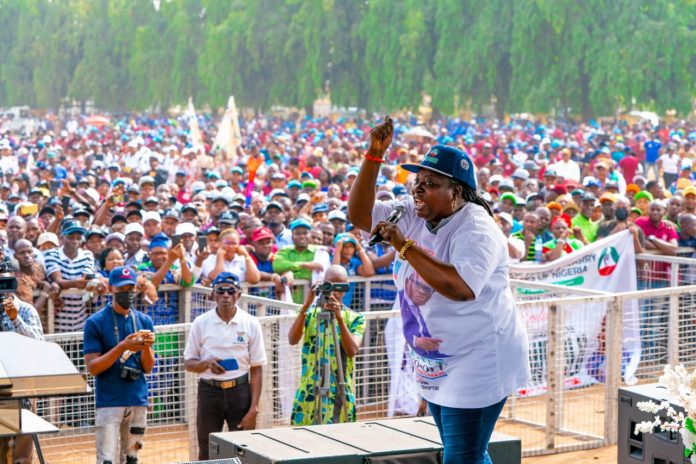 For the first time, Organised Labour in Lagos State came out to openly declare support and threw their weight behind candidate of a political party.

Labour leaders, on Thursday, held a mega solidarity rally in Ikeja to endorse the re-election of Governor Babajide Sanwo-Olu of the All Progressives Congress, citing the Governor’s landmark achievements and his implementation of labour-friendly policies in governance.

Lagos NLC chairman, Funmilayo Sessi, and her counterpart in TUC, Gbenga Ekundayo, led thousands of workers in the rally held at the Police Training College in Ikeja GRA.

The labour movement in the state also endorsed the APC presidential candidate, Bola Ahmed Tinubu, saying the model he instituted took Lagos out as the best labour-friendly State.

Sessi explained that the move was not to politicise the Organised Labour, but said the unions were not comfortable to sit on the fence in a governorship election in which Sanwo-Olu, whom she described as “the most labour-friendly Governor”, is contesting.

The Lagos NLC chief said the Organised Labour met in congresses prior to the rally to sample the opinions of people in the labour movement about gubernatorial contenders in Lagos.

She said the decision to support Sanwo-Olu was made after members of the Organised Labour unanimously endorsed Sanwo-Olu based on his fulfillment of promises to the movement.

Sessi said: “Before we embarked on this rally, we all agreed at our respective congresses to support Sanwo-Olu to continue as our Governor. We have made the decision before today but we only came out to display our solidarity with him publicly. What we have done right in our house, we are showing it to the world. This is the first time the Organised Labour in Lagos is taking open position to endorse candidate of a political party.

“We are doing this because Sanwo-Olu has introduced unprecedented reforms to improve the welfare and the wellbeing of workers. We are coming out with our full chest to support the Governor. We are deciding our fate by being part of the electorate that will return the most labour-friendly Governor. This is the decision all workers agreed upon and there is no going back.”

Sessi said the Organised Labour possessed a large voting strength in the election, stressing that workers constituted 60 per cent of the electorate.

Sessi said Sanwo-Olu became the first sitting Governor to donate free hectares of land to Organised Labour to build housing scheme for workers, while also appointing a representative of labour in the State cabinet.

She added that Sanwo-Olu also considered the plea of the labour unions for a land in Central Business District to build a befitting secretariat for Organised Labour.

The TUC chairman, Ekundayo, said there was no need for the Organised Labour to beat about the bush in endorsing the Governor, noting that Sanwo-Olu was the first Governor to bring the labour close to table on which major decisions about workers’ welfare were being taken.

The inclusion, Ekundayo said, has allowed the workers to be part of the policies and procedures affecting their productivity.

The TUC also confirmed each labour union held a congress before coming up with the decision.

He said: “Democracy is about inclusion and giving listening ears to the plight of the people. We have tested Sanwo-Olu and we have found him to have listening ear. He also has a large heart to accommodate. We have decided and agreed. We are coming out en mass in the next election to vote for APC candidates in the presidential election and state election.”

Responding, Sanwo-Olu described the workers’ endorsement as “a well-considered decision”, saying the gesture would be reciprocated with more efforts to improve the lives of workers in Lagos.

He said: “Going by this Organised Labour endorsement, I have no doubt we are coming back better and stronger. We will embark on governance much more than we have done and provide the best workplace for you to flourish. This endorsement is a confirmation that workers believe in our leadership and we will not take you for granted.

“It is only when we are committed to doing more for you that we believe we would have made the best impact on your lives and those of your children. Our Government is for the people; we will not disappoint you. On behalf of my political party, I accept the endorsement as your choice and I promise not to let you down. The endorsement must now be supported by voting for APC candidates in the presidential election and state elections.”

Special Adviser to the Governor on Labour Matter and Industrial Relations, Babatunde Williams, said the labour’s endorsement testified to the “complete trust” the workers had in the Governor and APC.