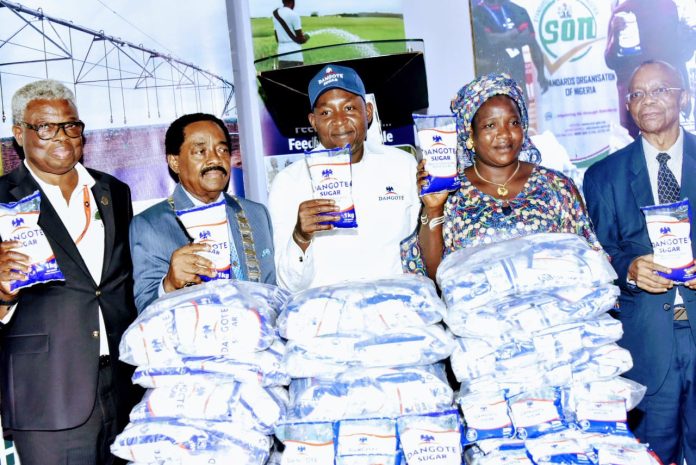 Dangote Industries Limited sustained efforts at providing basic infrastructure through various intervention projects have received the commendation of the Lagos Chamber of Commerce and Industry.

President of the LCCI, Micheal Olawale-Cole in his remarks yesterday at Dangote Group’s Special day at the ongoing Lagos International Trade Fair said the foremost indigenous conglomerate has contributed significantly in providing solutions to the problems Governments have not been able to solve in areas of food sufficiency, road construction, housing, and energy.

He noted that Dangote Group has been at the forefront of job creation even as its products and services have touched the lives of millions of people across the African continent and beyond.

He enjoined other corporate bodies to toe the line of Dangote in assisting the Government, through the provision of infrastructure, even if it has to be through a tax credit scheme, introduced by the Federal Government.

Welcoming participants to the special day, Group Chief Commercial Officer, Dangote Group, Rabiu Umar, disclosed that the Group is passionate about deepening the Nigerian economy through industrialisation, job creation, provision and rehabilitation of essential infrastructure, and the welfare of the citizens.

According to him, it is the desire to promote industrialisation that informs our decision to become strategic partners with all the major Chambers of Commerce across the nation.

He said, “Our participation at all major trade fairs across Nigeria demonstrates our belief that Chambers of Commerce & Industry occupy a unique position in driving economic development through their activities. Lagos Chamber of Commerce & Industry (LCCI) occupies a unique position as the pioneering chamber and has continued to play a ‘significant role in the economic growth of Lagos and Nigeria in general.”

Umar stated that the theme of the fair “Connecting Businesses, Creating Value” resonates with Dangote Group, as all investment decisions are focused on creating value for all stakeholders across the subsidiaries.

He said, “we have invested in several projects which are meant to create jobs and enhance rapid industrialisation of the Nigerian economy.”

Giving an insight into the activities of the subsidiaries, he said that the activities of Dangote Cement have had a multiplier effect, providing direct and indirect employment to millions of people across Africa.

He added, “Our food subsidiaries, Dangote Sugar Refinery, NASCON Allied Industries (Dangote Salt), and Dangote Rice are providing jobs through various schemes. Dangote Sugar Refinery, through its out-grower scheme, has provided jobs to thousands of farmers in the host communities. The coming of Dangote Fertiliser has to a great extent helped to change the face of agriculture in Nigeria while the Dangote Petroleum Refinery when functional will drive the development of ancillary industries which will utilize the byproducts as raw materials.”

According to him, the new product package will establish a clear differentiation and enhance the attractiveness of the pack.