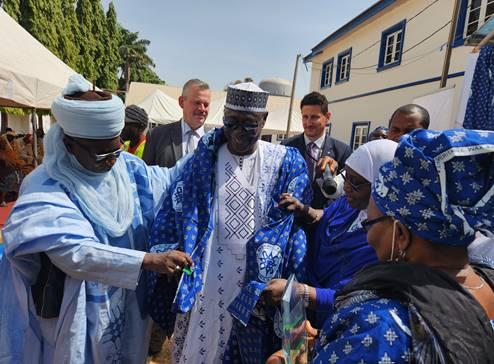 The pioneer and foremost women Non-Governmental Organization in northern Nigeria, Jam’iyyar Matan Arewa has described and commended the country’s leading construction company, Julius Berger Nigeria Plc, as “… a most responsible company with a highly functional, productive and commendable Corporate Social Responsibility Culture…worthy of emulation by others.’’

The President of JMA, Hajiya Rabi Musa Saulawa, made the remarks in Kaduna on Thursday at the handing over of the renovated buildings at the Jam’iyyar Matan Arewa Orphanage and Premier school.

The renovation works were undertaken by Julius Berger as part of the company’s corporate social responsibility initiatives to partner with and assist the development of its host communities along the geo-strategic Abuja-Kaduna-Zaria-Kano Road construction project.

Rabi Musa Salauwa who traced the history of Jam’iyyar Matan Arewa to Nigeria’s First Republic, said it was founded in 1963. By December 1, 1964 Jam’iyyar Matan Arewa opened the orphanage in Kaduna. The take-off property for the orphanage was donated by the then Premier of Northern Nigeria, the legendary Ahmadu Bello, the Sadauna of Sokoto along with a cash donation of £500 as takeoff grant.

Hajiya Rabi celebrated that since its founding till date, over 3,000 orphans have successfully passed through the Jam’iyyar Matan Arewa Orphanage and its schools.

According to Hajiya Rabi, many of the children who passed through the institution are now graduates of universities and polytechnics. Two of such students are graduates of the Nigerian Defense Academy and one attended Nigerian Aviation School Zaria and is now a pilot, while several others are now police officers.

Hajiya Rabi, however, said the JMA Orphanage, office accommodation and schools overtime fell into a deplorable state of dilapidation due to paucity of funds, being an organization that depends solely on donations and the little income generated from the schools. She said the funds generated have been grossly inadequate to carry out any major renovations and for the smooth operations of the organization.

Thus, she heartily thanked Julius Berger for its very meaningful CSR intervention to assist with the renovation of the buildings of the institution.

Bayi, who grew up in Kaduna, also said that, “…on a very personal and nostalgic note, I equally feel a deep sense of happy homecoming to stand before you in this event in Kaduna. While I am here representing our Managing Director, Dr. Richter, and officially on speaking for Julius Berger Nigeria Plc, please still kindly allow me to say it feels good to be home in your midst.’’

Bayi’s respectful remark was happily received with an appreciative applause by the well-acknowledged guests.

He then proceeded to say that with a healthy sense of modesty, Julius Berger is a household name and sector leader in the construction industry in Nigeria.

He added that, currently, the company is entrusted with several important federal priority projects across the country, including the geo-strategic Abuja-Kaduna-Zaria-Kano Road (AKR) project.

According to Bayi, since the inception of the AKR project, as part of the company’s standing culture of Corporate Social Responsibility and its derived initiatives, Julius Berger has proactively collaborated with and positively touched lives in its host communities along the project corridor.

“We have achieved our Corporate Social Responsibility objectives by providing either new or making worthy improvement to existing utilities or amenities. Our CSR activities ranged from drilling of boreholes to supply water to our host communities, construction or renovation of classrooms, and donation of textbooks and other teaching, learning and sporting aids to schools, ’’ said Bayi.

Other Julius Berger CSR contributions, said Bayi, include hospital donations and related needs such as ambulances, beds, mattresses, personal protective equipment to protect against the Covid-19 pandemic, emergency food supply through the Julius Berger ‘Food for our Communities’ Campaign; and insecticide treated mosquito nets to protect pregnant women and children from the deadly scourge of malaria.

The distribution of food palliatives was also extended to orphanages to mark the International Day of Charity and, most recently, to communities affected by the recent and sad flood inundation.

All along the Abuja-Kaduna-Zaria-Kano road corridor, several communities, he said, have benefited from Julius Berger‘s Corporate Social Responsibility activities.

Bayi further informed the gathering that, significantly, as a deliberate policy targeted at empowering its host communities, Julius Berger ensured that local contractors were used in executing all the projects and procurement of the items either in the form of construction materials or commodities. “Selection of beneficiaries of these projects was also tactically done on the basis of fair spread of community empowerment.”

According to Bayi, most distributed Julius Berger CSR items were also sourced locally from host communities.

“This impacted positively on the economy of these communities through job creation and enhancement of local purchasing power….On the average, over 500 direct and indirect jobs were created from the execution of these Julius Berger Corporate Social Responsibility projects.’’

Bayi informed the gathering that it was in line with Julius Berger’s proactive CSR policy that the Jam’iyyar Matan Arewa Orphanage, Kaduna, which forms part of the host communities of the Abuja-Kano Road Project, was identified as a suitable institution that should benefit from Julius Berger’s Corporate Social Responsibility contribution. This led to the decision to embark on some rehabilitation works at the orphanage that was in dire need of restoration.

While commending the respected President of JMA and her team for their commitment to selflessly revamp the Orphanage and its schools, Bayi added that, the main driver of Julius Berger’s Corporate Social Responsibility intervention is to restore the historical monument to again reflect the vision of its founders and their lasting commitment to society’s well-being.

Julius Berger officially thereafter handed over the renovated Jam’iyyar Matan Arewa Orphanage to its President, Hajiya Rabi Saulawa and its Board of Trustees.

Julius Berger was thereafter given an award as an “Outstanding and compassionate Organization with a self-recommending Corporate Social Responsibility Culture.”

At the end of the ceremony, senior officials of Julius Berger Nigeria Plc who were present at the ceremony, including the executive director of administration, Alhaji Zubairu Ibrahim Bayi, the technical director of the ongoing Abuja-Kaduna-Zaria-Kano road construction works, Benjamin Booth, and the Project Commercial (AKR) project.

According to Bayi, since the inception of the AKR project, as part of the company’s standing culture of Corporate Social Responsibility and its derived initiatives, Julius Berger has proactively collaborated with and positively touched lives in its host communities along the project corridor.

Jam’iyyar Matan Arewa is an umbrella social and non-political organization of women in Northern Nigeria from all backgrounds regardless of their religion, tribe and social status leading and driving the process of women empowerment in the Northern parts of the country.