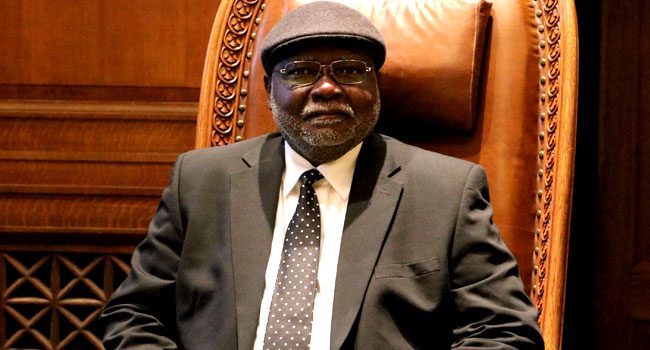 He stated this on Saturday night in Ibadan at a reception organised in his honour by the Oyo State Government.

He said: “I want to admonish the politicians to leave the Judiciary alone for us to function. Let them do their own thing while we do ours too. Law is not static. What we apply is law as it is made.”

Justice Ariwoola appreciated Governor Seyi Makinde for honouring him and pledged that he will not let Nigerians down.

The CJN noted that there is no way anybody would write about Seyi Makinde as governor of Oyo State and would not write that a CJN came from the State during his tenure as governor.

He said: “I feel overwhelmed today and thank my Governor. I want to assure Nigerians that we are ready and waiting and we shall not let down Nigerians.

“On the 12th of October, when I was sworn-in as the CJN in substantive capacity, the governor appreciated President Muhammadu Buhari on behalf of the entire Oyo State and the president just smiled, but maybe he did not understand.

“The Lord single-handedly, as He has always done, did it for my governor. It is during his time that the Yoruba has the position of the CJN again, which it last had 37 years ago.

“So, this dinner that the governor has organised today, is to give gratitude to God, because there is no way anybody would write about Seyi Makinde as governor of Oyo State and would not write that a CJN came from his place during his time as governor.

“His Excellency, I congratulate you so much and this is novel again. You moved four executives of their respective states to this dinner in appreciation of God.

“Your Excellency would have noticed that being a Pacesetter State, what happened on the day of my swearing-in was more of a Pacesetter event.

“The GCON is often given to the CJN upon being sworn-in, but as a child of the Pacesetter State, I had been given the honour before I was sworn-in as the CJN.”

Speaking earlier, Governor Makinde declared that his administration will continue to promote the independence of the Judiciary in the State.

The governor maintained that his administration has created the enabling environment for the judicial arm of government to carry out its constitutional responsibilities, because it recognised that it is the bastion of hope for the common man.

At the event which had in attendance four other state governors, justices of the Supreme Court, Oyo State Judiciary, top lawyers and other eminent dignitaries, Governor Makinde expressed delight at the fact that the State produced Nigeria’s Number 5 Citizen.

The governor, who explained that it was the first time in the history of Nigeria that Oyo State would produce the Chief Justice of Nigeria, said that the development has heralded many pacesetting achievements for the State.

“When my Lord, Justice Amina Augie JSc., was talking, she said ‘our own Justice Kayode Ariwoola, but more of their own.’ So, the CJN belongs to everybody and to nobody.

“I thank God for tonight and for the fact that the Supreme Court was powerfully moved to Oyo State, and what you see here is Nigeria. We have my Lords from different states and geopolitical zones of this country.

“Most times, they come together, align and make decisions in the interest of this great country. We are glad you are here with us and feel highly privileged to have you here.

“For me, this is a turning point. For the first time in the history of Oyo State, we have produced the Number 5 citizen of the Federal Republic of Nigeria. So, old things have passed away and things have become new.

“I am just glad and overjoyed that we are able to have this get-together to celebrate one of our own. I am short of words. I am thankful to God Almighty for this day and I see it as the beginning of many Pacesetter things that will be happening in Oyo State.

“So, I thank you all for making it to this event and look forward to many of these.

“One thing we can take away from this gathering is that as for me, and other politicians, who recognise the fact that the judiciary is the hope of the common man, we will continue to allow the judiciary to function independently.

“The Judiciary will be allowed to continue to carry out its constitutional responsibilities.

“Once again, For Oyo State, we are delighted that we are able to witness this day.”